Hell on Earth
The Zombie appears as a replacement for the Possessed in Doom (2016). Zombies appear as cannon fodder in the game and never become a serious threat for the player.

Possessed by the influence of Hell, once human underlings that follow in Hell's ranks are those that have been corrupted and deceived by its power, forsaking their own humanity. Those who have fully succumbed to Hell's will cannot be saved, becoming mindless, grotesque contortions of their former selves.

Notable features of the Zombie are the pentagram on its forehead, its elongated fingers, and decrepit appearance. A version of this Zombie wearing cultist robes can be found throughout Cultist Base. These variants are most commonly found on Earth.

Zombies will do little more than slowly stumble toward the Slayer and attempt to bite/scratch him when within range, but are otherwise helpless. They can be killed very easily.

Zombies are not real threats, and are more of a useful tool than a true enemy. Entire groups of Zombies can be gibbed with a single sticky-bomb, making them useful targets for the flame belch. 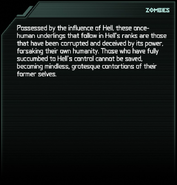 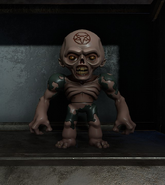 Cultist Base Zombie
Community content is available under CC-BY-SA unless otherwise noted.
Advertisement