The Whiplash is a brand new demon appearing in Doom Eternal.

The Whiplash is a Cybernetic Snake like demon, with two thin horns curving up and backwards over its head, where its brain is exposed. Its arms are covered in what resembles long, black gloves and wields a chain whip ending in a curved blade, hence its name. From its abdomen down, the Whiplash's body is cybernetic and snakelike. According to game director Hugo Martin, the whiplash is female.

The Whiplash crawls and slithers at an alarming speed to flank and slash the Slayer with its energy chain blades. It can hop ledges with its chains, using them like grappling hooks. It can also fire argent energy waves similar to the Summoner.

Due to its tendency to duck its head and slither around on the ground, accurate weapons capable of firing high-speed projectiles such as the Heavy Cannon, Combat Shotgun, Plasma Rifle, Super Shotgun and Rocket Launcher is highly recommended. 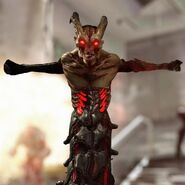 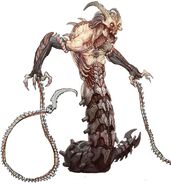 Add a photo to this gallery
Retrieved from "https://doom.fandom.com/wiki/Whiplash?oldid=132792"
Community content is available under CC-BY-SA unless otherwise noted.