The Union Aerospace Corporation is the fictional multi-planetary conglomerate (possibly a megacorporation) that operates facilities on Mars and its two moons, Phobos and Deimos, where Doom takes place, as well as Earth and its Moon, and many offworld moon and planetary research stations including Tei Tenga, Jupiter (and Europa), Venus, Neptune, Amun and Saturn. It was founded in 2015 by Thomas Kelliher.[1]

The UAC in Doom, Doom II and Final Doom

The UAC is a multi-planetary conglomerate with radioactive waste facilities on Mars and its two moons, Phobos and Deimos.

Mars is the home of the Union Aerospace Corporation. Additional details indicate a base on Tei Tenga and other offworld sites as shown in the Phobos Hangerbay, and data being transmitted on various screens. They also have bases on Earth.

The facilities on the two moons were used to conduct various classified projects, including experimental inter-dimensional travel through teleporters (called "gateways"). This project grew unstable, and project "volunteers" began to suffer from a violent form of progressive homicidal insanity culminating in a sudden, explosive death. The story of the games begins after distress messages sent from the moons reach Mars, where the original the protagonist was stationed.

The backstory for Doom II states the hero from the game is a survivor of a demonic invasion of the UAC Mars Base itself (which apparently occured parallel to events of Doom), having stopped the monsters from the Outside, before taking leave and landing on Earth in a drop ship (which is a seperate background to the marine from Doom I who reached earth through 'gateways/teleportation'). Not much detail is given about the UAC's activities given the sketchy nature of the plot of the games, but it is made clear that before the invasion took place the UAC had been researching technology used for teleportation as a major contractor to an unknown military, which may explain why their facilities were guarded by Military personnel, and why a Marine team would be sent there in case of a major issue (such as the player character, a marine).

As is evident during progress in the games, the populations of the UAC facilities are either killed or possessed by the hellish invaders unleashed by the teleportation experiments. In Doom II, which takes place on Earth, there are occasional UAC logos throughout the levels, indicating that the protagonist enters various areas owned by, operated by, or associated to the UAC on Earth. Both games include crates of various sizes containing unknown materials which are marked with the UAC logo. A clear sign that the UAC develops military technology is the "UAC rockets" label on the boxes of rockets the player may pick up as ammunition for the rocket launcher.

The UAC logo is composed of two flattened spherical shapes with a smaller triangular space between them. The initials are often written beneath the shapes using the customary rounded font of the games. There are some variants though such as UAC spelled out with stylized U sort of like a fat animal with horns, A is Triangle, and C with a crescent moon. Some say UAC BASE under the logo, rather than just UAC. The size of the arrow/triangle appears differently on different versions of the logo as well. There are two different color version for the UAC delivery symbol printed depending on if they are cardboard or metal boxes.

Note: This classic UAC Logo also appears in Doom 3 and DOOM (2016) on various containers and wall outfittings/pipes/computers as well.

Doom 64 is more or less a continuation of Doom 2/Final Doom materials. Using an updated version of the original engine but with new textures and sprites. As such there isn't a whole lot of new details concerning the UAC in it, and seems to deal more with Marine Military bases before going to hell, other than Hell is back, and its Marine's job to prevent another incursion. There isn't any artwork showing the UAC logo on any of the new original wall textures, though the new explode-able barrels, box of rockets, and the BFG ammo packs do have "U.A.C." listed on them. UAC can be seen on some of the new weapon models such as the double chainsaw.

The UAC in Doom 3

With Doom 3, a reboot to Doom (though it somewhat mirrors the Doom II's backstory about the invasion of UAC Mars Base, and the single marine survivor from the battles on Mars), the story is given greater depth of detail through the player's interaction with human characters, PDAs, cutscenes, and scripted events.

A new UAC logo has a roughly triangular shape, with the initials written near the bottom or base. Versions of the new logo show up on screens with the circle in the middle appear as Mars itself.

The facilities where the experiments take place and the marine battles the invaders are on Mars instead of its moons. Increased focus is placed on the importance of the UAC research being conducted (specifically research under the guidance of Malcolm Betruger) by a division called "Delta Labs". Like in the original games, a great deal of the UAC's research seems to be focused on teleportation, although experimentation with species retrieved from beyond the teleporters, and weapons is also seen.

The UAC on Mars was secretly aware of the existence of Hell even before the invasion. On the orders of Betruger, Delta Labs sent teams through the portals to capture demons for study.

The older logo from the original games appears frequently on crates, machines, computers, airlocks/hatches/doors. It is first seen in Mars City at the start of the game, with many examples of it appearing on equipment and screens in the Marine's HQ. In fact the old logo shows up all over the place in the first level of Doom 3 if you look around the Hanger where the DarkStar has landed, on binders, and even in the kitchen on wall panels. It also seen exclusively in the older Mars caverns areas (and also on some of the pentagrams in the game).

For the promotion of Doom 3, id Software created a bogus UAC website. The "trajectory" mentioned on the site had two meanings. Within the context of the game, it represented the estimated arrival time to Mars of the shuttle that carried Swann, Campbell, and the player's Marine. In respect to the game as a product, it was actually a countdown to its release date. The site currently redirects to the id Software website (since early December 2005) but an archived copy can be accessed at the Internet Archive.

The UAC in Doom RPG series

UAC in Doom RPG I and II is a mix of elements of classic Doom and Doom 3, and the website purports that it is a continuation of sorts (though never clear if its an interquel or sequel, but at least using the same character as Doom 1-3, and is a return to Mars for the character). The Official website to tie into the story, and is a mix of Doom 3 and Doom 3 novel material.

On the official website for Doom RPG, there are links to a Union Aerospace Corporation[2]website, convincingly designed in the style of a large business company's home site. Many of the links lead to Access Denied pages to give an impression of confidentiality (actually due to UAC's recent 'incident' and destruction/invasion), but it shows some information on the fictional history of the UAC. The website and its related game is a mixture of Doom 3 related material, as well as classic Doom. Several of the characters and details on the website are connected with the Doom 3 novels. The main logo shown on the page is the Doom 3 logo.

In the base are green item crates similar to the crates from Doom 3, that appear to have pixellated version of the classic UAC logo on it much like in Doom 3. UAC in block letters can be found on panels usually next to the Computer terminals.

Deimos is missing from Mars in a nod to the original Doom.

See UAC (2016) The UAC in the 'soft-reboot' series appears to be a rought continuation of the Doom 3 timeline, as Doom 2016 makes references to several events and dates from that timeline, which both share (see Shared timeline). There is however plenty of extra history and information introduced in the soft-reboot series to discuss it within its own article.

The UAC in DOOM Eternal

In Doom Eternal the UAC is in hot water as Earth gets invaded by the forces of Hell destroying countless numbers of its facilities as well as military equipment used to try defend Earth. Various Mechs made by the company can be seen in ruins.

UAC also has a base on the moon of Titan, Moon Base Titan.

UAC in Other ID Games

In Spear of Destiny: Mission 3: Ultimate Challenge, Hitler has found a way via the occult to see into the future and even travel there, and he's stealing technology in order to give the Nazis an advantage over the Allies. At one point B.J. Blazcowicz is transported to the future into a UAC base where he sees UAC boxes, and Doom computer monitors showing the sun. Like in Doom its been invaded by a Demonic force (Devil Incarnate).

According to Quake IV: The "Armstrong" was an Orbital Space Station in low orbit around the Earth. During the Strogg invasion of Earth, it was used by the U.A.C. to study and store creatures and weapons developed on Mars. When the Strogg invaded Earth, the station had been turned into an Orbital Defense Platform, but it was ultimately taken down by the Strogg. During this incident, Kane found an old U.A.C. weapon which he used to survive. He turned out to be the only survivor of this attack, but The United Nations kept him quiet about this incident, leading to rumors that the weapon wasn't all he had found. In Quake III Arena Doom (character), in the chat lines when losing the match, you can witness him losing levels of his sanity. Talking about voices from the pitch, massacres in the corridors of UAC and dead friends.

The UAC in the Doom movies

The UAC has a role in the Doom movie as well, but their ambitions and scientific work deviate somewhat from those in the games, as they focus on genomic research, even though teleportation is also used as a form of transportation between Earth and Mars. It should be noted, however, that genomic research was mentioned in Doom 3. The genomic research in the movie focuses on a 24th chromosome which makes humans exceptionally strong and enduring and enhances or exacerbates their moral inclinations. In the movie the UAC operates on Mars and the brunt of the action takes place in the "Olduvai Research Station".

However its also shown in the movie that they are working on advanced weapons development as well, and researching the teleportation which they use to travel between Earth and Mars Olduvai Complex.

The logo is similar to the central section of the Doom 3 triangular logo. There are two forms of the primary crest. Either circular central portion circled by three pointed triangles (usually as seen on computer screens) or three stubbed triangles (see in physical signage). In addition there is a version with the triangle pointed downwards with a pentagon around it, which appears to designate UAC security.

Each section including Genetics Research, Advanced Weapons, etc each have their own symbols/logos as well on clearly marked green signs. 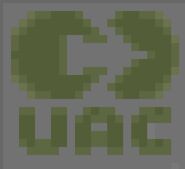 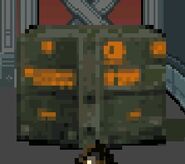 Retrieved from "https://doom.fandom.com/wiki/Union_Aerospace_Corporation?oldid=133508"
Community content is available under CC-BY-SA unless otherwise noted.