The Union Aerospace Corporation is a global megacorporation based on Mars and is the main supplier of Argent Energy. The leaders of the organization included Head of UAC Mars, Project Director of the Argent Facility/Chairman Samuel Hayden.

In 2095, the UAC conducted a geological survey mission on Mars where they discovered the "Argent Fracture" and Argent Energy. Within a year, the UAC established an outpost to extract Argent plasma from the Fracture and producing Argent Energy, which became the primary power source for human civilization, and enriching the UAC.[1] The UAC is wholly aware of the exact origins of Argent Energy in Hell and kept this knowledge hidden from the public, to ensure in exploiting Hell and its resources in order for, in Samuel Hayden's words, "mankind's best interest to do so."[2]

The UAC conducted multiple explorations into Hell, where manned expeditions were utterly massacred by demons. Despite the costly losses, the UAC managed to recover artifacts such as the Corrax tablets, the Praetor Suit, and even the sarcophagus of the Doom Slayer. The UAC also captured demons to be experimented and turned into bio-weapons.

Over half a century since the discovery of the Argent Fracture, the UAC became slowly subverted by the corrupted influence of Hell. As a result, UAC personnel under Dr. Olivia Pierce formed a demon-worshiping cult within the corporate structure. Hayden and the UAC board of directors were aware of Pierce's cult, but initially tolerated it as long it produced benefits for the corporation's and mankind's progress. Inevitably, the cult grew beyond the UAC's control and leading to Pierce plotting to open the gates of Hell, unleashing its demons to invade the human realm.

In 2149, Pierce unleashed a wave of Lazarus energy that consumed the Mars facility and allowing demons to invade the facility. During the initial hellwave, 64% of UAC personnel were transformed into demonic creatures while the remaining 61,337 people were killed by the demons, including those released from the Lazarus facility's holding cells by Pierce.[3] (Note that there is a bit of ambiguity in VEGA's report, as VEGA could also be counting the Possessed as "deceased", in which case 64% of the 61,337 were transformed into Possessed.) All humans in the complex were either killed or zombified, with the sole exceptions of Dr. Hayden and Olivia Pierce; unlike in Doom 3, all un-Possessed survivors were dead by the time the Slayer was awakened, so he never has a chance to meet any of them.

Hayden was forced to release the Doom Slayer from his sarcophagus, as the Slayer was the only being that could stand between Hell and Earth. The Demon Slayer had not initially allied with Hayden, refusing to trust the UAC, and waged his one-man war against the demons, leading to the destruction of the Argent Tower. Regardless, Hayden helped the Doom Slayer in locating The Crucible and gave him access to a BFG-9000 prototype. After another venture into Hell where the Slayer finally killed Pierce and sealed the portal from their side, Hayden confiscated the Crucible after teleporting the Slayer back to corporate headquarters so he could use it in future research, subsequently warping the Slayer to an unknown location, where he would be unable to interfere with UAC's research.

Samuel Hayden returned to Earth with the Crucible in hand, intending to use it to restore his monopoly on Argent Energy. Earth, in chaos due to the loss of the power grid that had depended on the facilities on Mars, provided Hayden with access to all UAC facilities on Earth in the hope that he would quickly solve the energy crisis.

The UAC split following the opening of the Hell Portals on Earth, with those forces loyal to Samuel Hayden forming the Armored Response Coalition while the section still identified as UAC (generally identified as "UAC Cultists") mostly pledged their loyalties to the invaders, with the three Hell Priests assuming leadership roles.

UAC's automated factories on Earth were similarly split, with some turning out war machines for ARC while others have been converted into labs for the production of powerful, technologically enhanced demons.

Some elements of the UAC appear caught between loyalties to the two factions, such as those in the base on Phobos. Phobos base was ordered to stand down and allow their personnel to be consumed by demons, but at the time of the Slayer's arrival was still engaged in active combat with Hell's forces, repeatedly firing the BFG-10000.

There are a number of UAC related logos in the 2016 reboot, including versions of classic Doom UAC logo (sometimes with Union Aerospace Corp written underneath, and sometimes without) and variations based off the Doom 3 UAC logo. The new design of the logo crest appears highly inspired from its depiction in the 2005 film adaptation of Doom.

The new UAC logo appears to take elements from the classic logo (which can still be seen on various UAC products throughout the base). The discs have become stylized U and C, and the Doom 3 triangular shape becomes a stylized "A" in the center where the triangle is in the classic logo.

There is yet another logo that appears on space related vehicles which is a ringed planet with an orbiting satellite or moon, with the older style Doom triangle/arrow in the center of the planet.

There is at least one logo where there is a highly stylized word "Union" appears in bold block letters. Some versions feature the words Union Aerospace (without the Corporation attached).

Beyond that there are many other logos with their own unique designs. The aforementioned may suggest that the different logos refer to different divisions and sub-corporations of UAC. 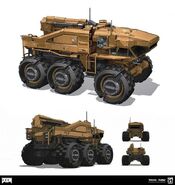 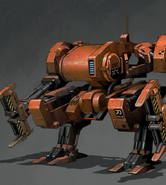