Titans are mighty beasts of Hell, far larger than regular classes. They serve as beasts of burden for the more powerful demonic entities, and as combatants in the armies of Hell.

During the war between the Night Sentinels and Hell's forces, Titans appear to have been Hell's counter to the Sentinel Atlans, though they do not seem to have fared particularly well against them. Titans do not seem to have been deployed to Earth on the same scale as they were deployed to Argent D'Nur, with the beasts seemingly only used in a rear-echelon role to transport the great temples of the Hell Priests.

They are implied to be enormously difficult to kill, with only Altan weaponry or the hellish blade of a Crucible shown as able to kill one: in the latter case, not permanently, as Samuel Hayden states that even if they are impaled through the heart, if the Crucible blade is ever removed the Titan will be restored to life.

The invasion of Taras Nabad was spearheaded by a particularly powerful Titan known as The Dreadnought, which proved impossible for the armies of the Argenta to defeat until the Seraphim Samur Maykr empowered the Doom Slayer through use of the Divinity Machine of the Maykr. Thus empowered, the Slayer cut down the Dreadnought with his Crucible, leaving the blade planted in the creature's heart.

A single Titan, seemingly a particularly large or powerful one, faced the Doom Slayer as he rampaged through Hell, but even this mighty beast proved no match for him. The precise manner in which he defeated the beast is unclear, but its skeletal remains are strewn across the area of Hell's Great Steppe. The behemoth whom the Slayer defeated in said domain doesn't share visual similarities with other Titans that are seen in Doom Eternal, such as the shape of the skull, visually distinctive teeth like the canine teeth that aren't present on other seen Titans, and additional set of fangs next to canine teeth, and different horn shape than the Titans from Doom Eternal. This might indicate that the Titan, which was defeated by Slayer, was entirely different type of Titan, maybe even unrelated to Ancestrals, possibly larger in size as well than its peers.

Living Titans are present in the Hell city of Nekravol, with one chained in a pit of lava outside the demonic city's gates with streams of molten material pouring from its eyes, and two more present at the highest level, pulling on chains to hold a section of the Maykr energy transfer device in place.

Another unique Titan, the Icon of Sin, was birthed from the torture of the son of the Betrayer and controlled using his heart. Later the beast was transported to Urdak and modified with Maykr technology to allow the Khan Maykr influence over it, but the Slayer destroyed the heart and left the beast to its own savage instincts, ultimately planting a Crucible blade in its exposed brain and ending the demonic assault on Earth. 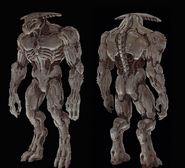 The Icon of Sin, a unique Titan

Add a photo to this gallery
Retrieved from "https://doom.fandom.com/wiki/Titan?oldid=134615"
Community content is available under CC-BY-SA unless otherwise noted.