The Ultimate Doom (or The Ultimate DOOM as a brand) is an updated version of Doom released on April 30, 1995, that adds a fourth nine-level episode, Thy Flesh Consumed, which contains eight regular maps and one secret map. This enhanced version was made as an incentive in the distribution of the boxed game through retail stores and venues, although to be fair to fans who had previously registered Doom, id Software provided them with a freely available patch to upgrade their copy of Doom version 1.9 to The Ultimate Doom.[1]

The player takes control of an unnamed marine who must battle his way through four episodes, and single-handedly eliminate each guardian of Hell; the twin Barons of Hell (E1M8), the Cyberdemon (E2M8), the Spider Mastermind (E3M8), and another Spider Mastermind (E4M8).

The Ultimate Doom's design was led by John Romero with American McGee and Shawn Green, and he recruited two prominent level designers from the fan community to complete the team, John "Dr. Sleep" Anderson (who would later help John Romero with Daikatana) and Tim Willits (who eventually became id Software's lead designer), while the artists did a quick job on a few extra graphics required for completion. Since the expansion was produced while id Software was involved in other projects,[2] not much thought was put into making it consistent with the previously developed plot of the game (which included Doom II, a portion that occurs after the added episode), and the designers simply concentrated on straightforward action (which was already the general focus of the games,[3] in any case). As a result the locales of the levels are unclear, and one is not certain if the protagonist is still in Hell, already on Earth, or somewhere in between. The final message and screen with the rabbit Daisy arguably reinforces the acknowledgment that the designers' main concern at that point was the levels and not the background story or any general aesthetic considerations. As Doom II features were present in the executable, some of these (namely sector type 17, switches that require keys to activate) and other linedef actions (such as fast doors) were used in the additional levels. In addition to making two of the new levels, John Romero modified the first level, E1M1: Hangar, of his first episode, Knee-Deep in the Dead, to allow more circulation among opponents during deathmatch games by adding openings into the central courtyard.[4]

Before the expansion's release and before the name The Ultimate Doom was picked, the game was referred to as The Definitive Doom Special Edition. References to the original name can be found in the source code and in the DOS installer of the game, which features the shortened name DOOM: Special Edition on the titlebar and suggests DOOM_SE as the default installation directory. 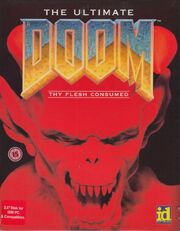