Doom Eternal
The Gladiator is a demon that debuted in Doom Eternal. It serves as the boss of Sentinel Prime.

In The Art of Doom Eternal, it is stated that the Gladiator cannot die, as when his flesh is destroyed, his soul shall wait for his body to rebuild like most demons in folklore, mythology, and in collective religions. There is a way to kill him, however, that involves destroying his shield, which is stated to contain the tormented soul of its master.

It hides behind it's shield to shrug off attacks. When the eyes of the shield flash green, attack. A headshot will stagger it for a Glory Kill, which isn't really a kill, but it involves punching the Gladiator twice, making it drop health points. Do this again and again until you reach his second phase. When the Gladiator's eye flashes, attack. Do it again and prepare for one of the longest glory kills ever. 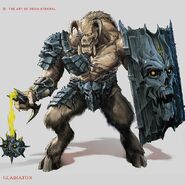 The gladiator as shown in "the art of doom eternal"

Add a photo to this gallery
Retrieved from "https://doom.fandom.com/wiki/The_Gladiator?oldid=134217"
Community content is available under CC-BY-SA unless otherwise noted.