The Doom Unity Open Tournament 2021 was a Doom speedrunning tournament that took place March 27th, 2021. The event was hosted by the moderation staff for the Doom Unity Port's speedrun.com leaderboard. The event was hosted live on speedrun.com's home page via the twitch channel ConsoleDoom, and generated over 15,000 views throughout the tournament.

The event was eligible for 8 players to join, however, only 6 players would finalize the player pool. Players all raced against one another in the Original Doom from 1993, using the Unity port from 2019.

The event was announced March 8th in the Console Doom community Discord server, Doomworld, and Speedrun.com. Included for the top 3 players was a $170 prize pool, provided by members of the moderation team, and community.

The entire event last just over 4 hours time, with technical issues starting out in synchronizing 3 players racing at a single time. By the mid point of the event, tech issues had subsided, and races built to a great display from the contestants.

Tournament entry required players to have a submitted personal best speedrun on the leaderboard for the Doom Unity Ports on Speedrun.com. Specifically in the Episode 1, 2, and 3 categories for the Original Doom. Players were also required to have access to streaming via twitch, and a working discord account that was in the Console Doom discord server.

In the event more then 8 players joined the tournament, a player points system was established using all of the episode categories placements. These points would help to determine the eligible players to enter the tournament. Players corresponding placement on the leaderboard in each episode, would give them an amount of points in relation to their placement. In the event a player held all 3 records in the 3 categories, they would have 3 points total, the lowest amount of points possible, and would give them the highest possible seed.

The tournament was played over 4 rounds, with 10 total matches. The first Round of the tournament had 3 players playing a single episode race. A 6 sided dice roll, determined which episode would be played during the first round. With 1, 4 representing Episode 1. 2,5 Representing episode 2, and 3,6 Episode 3. 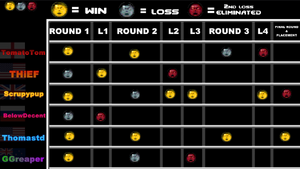 Episode 1 would be played, with GGreaper, BelowDecent, and Scrupy pup playing the first match. The 2nd Match would be played with TomatoTom, Thief, and Thomastd.

Match 3 would be played with the 3rd place player from both previous matches. BelowDecent and Thief would play episode 1, with Thief keeping his tournament life into Round 2, and BelowDecent being eliminated.

Round 2 would now have players being given 2 of the first 3 episodes they were both to complete during their race against one another. The 2 episodes were determined by a 6 sided dice roll.

Match 4 would be Scrupypup vs Thomas, with Scrupy taking second place. Match 5 with TomatoTom vs GGreaper, with Reaper taking second place. Match 6 would be Thief vs Scrupy to determine tournament life, with Thief taking a disqualification after 1 and a half episodes into the race, due to faulty mouse issues. Scrupy would go on to win in Match 7 against GGreaper, who would go home as the final player without a prize.

Round 3 began with Match 8, TomatoTom vs Thomas in the first race to cover all 3 episodes of the game. TomatoTom would take second place, and play against Scrupypup in Match 9. Scrupypup would go onto win match 9, with TomatoTom taking 3rd place in the tournament as a result.

Round 4 was a single match against the final 2 players, Thomastd and Scrupypup. The format was now best of 3 races. The first race was one of the closest races of the entire tournament, with Thomas finishing the game in 13:32, and Scrupy finishing in 13:37. The second race would go on to become the final race of the event, with Thomas taking home 1st place with a 13:11 finish, and Scrupypup finishing 2nd with a 14:04 completion.

Leading up to the event, another Doom community member Ekudeht, offered a $100 prize to any player who knocked out the contestant Scrupypup in the tournament.