60 (Nightmare)
The Tentacle is a new enemy introduced in Doom Eternal. It serves as an ambient threat to punish unwary players.

The subject of great scrutiny for ARC scientists on Earth, these Hellgrowth formations have appeared all over the planet, taking hold wherever Hell has made its presence known. Forming chaotic, seemingly random structural patterns, the propagation of hellgrowth has taken root at an alarming rate, exhibiting a cellular reproduction cycle that ARC scientists fear may become impossible to contain. The resultant environmental effect is extremely hostile to terrestrial life, producing atmospheric bio-contagions and a multitude of organic hazards. Wherever these nest-like formations emerge, they are protected by swathes of defensive tendrils - long thorned tentacles that demonstrate a keen awareness of their surroundings, fully capable of disemboweling anything that it deems a potential threat to the nest.

The Tentacle hides within a fleshy, toothy hole in the ground, waiting for an unsuspecting victim to wander within its vicinity. The Tentacle itself is covered in teeth, with the tip of the Tentacle housing a large claw to impale victims. Suckers line the sides of the Tentacle, and a dark hide stretches down the rear of its body. But be aware! Not every hole has a Tentacle in it.

The Tentacle will lurk within its burrow until the Slayer gets close. It will then shoot out of the hole and attempt to impale the Slayer with its claw. If it misses, it will pause briefly before either attacking again or slithering back into its burrow. The Tentacle is also surprisingly strong, capable of dealing substantial damage to any player careless enough to approach it without caution.

However, the Tentacle does have obvious weaknesses. For one, it is immobile, incapable of damaging outside of its small attack radius. It is also comparatively weak. A point-blank Combat Shotgun shot is capable of killing it without fuss, and half a dozen or so well placed Heavy Cannon rounds can put it down easily enough. After performing a lunge at the Slayer, the Tentacle will temporarily pause, allowing for an opening to easily take it out. Interestingly, Meat-Hook grabs using Super Shotgun on Tentacles can also be performed for some good maneuvers.

It should also be noted that not every Tentacle burrow actually houses a Tentacle.

In the Ancient Gods DLC, there are huge tentacles that serve as mini-bosses throughout the Blood Swamps map. They have more health, and perform the same attacks, but with more damage. 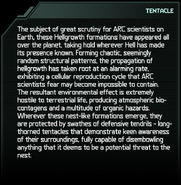 A Burning Tentacle
Community content is available under CC-BY-SA unless otherwise noted.
Advertisement