< Spiderdemon
View source
watch 02:52
Roblox: DeepWoken - The Loop
Do you like this video?
Play Sound
Sub-Pages:

Will gib when health is low

Lazarus Labs (Vision)
Argent D'Nur
The Spider Mastermind is the final boss in Doom (2016), which merges with Olivia Pierce in order to defeat the Doom Slayer once and for all.

"The first Project Lazarus Tethering Operation retrieved a small compendium from the Umbral Plains in the crypt of a destroyed tower of unknown construction. This "vade mechum" was mostly illegible, but it did contain one of the rare references to the Aranea Imperatix - a mystical demon that is still largely unknown."

"When the gate is opened, in the fourth age, when we have risen and the masters have shown us the path, she will be come. A great blessing will be given to the key holder, for they will become one with the master, and in that holy union the power of the dark priest will be unleashed upon the heretics of the Penumbral Plain. The Aranea Imperatix. Carried in the mind of all who follow, fed from the blood of those who fell, made with bone of rock, iron, steel and sinew. A mighty god to rule over all other gods. One become two become legion."

The Spider Mastermind has a large health pool and has a number of attacks which can cause serious damage to the player, such attacks include jumping near the player and a sweep at the player with its legs, firing bolts resembling the plasma rifle from an underslung gun, and firing a sweeping laser from the body as well as other lasers at the sides forcing a player to jump and crouch to dodge them.

It can saturate the area with spiked bombs, as well as call upon pillars that rise up from the arena. Occasionally it will electrify the floor, which forces the player to climb up on these pillars. Sometimes it will cause spikes to rise from the pillars which can damage the player and thus it's a good idea to take the opportunity to use the BFG, especially given it remains stationary. The Super Shotgun can be used to inflict damage when the BFG stuns the Spider Mastermind, which yields health and ammunition pickups.

The Spider Mastermind's face is the most noticeable weakpoint, as the exposed brain and machinery do not seem to take much damage. The rocket launcher's lock on feature is especially good for maintaining constant damage output. It will also sometimes invert itself, putting the gun turret above its head, though it will not shoot a sweeping laser like this.

When most of its health pool is drained, the Spider Mastermind will crawl on its remaining legs to support itself and will turn upside down on itself to shoot lasers. Upon defeating the Mastermind, the player will initiate a unique Glory Kill which involves opening the Spider Mastermind's mouth, shoving the BFG down its throat and firing the weapon, regardless of remaining ammunition, resulting in the Spider's enormous brain being blown to pieces, and receiving a massive hole through the entire middle. 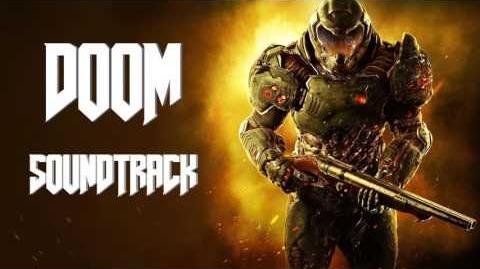 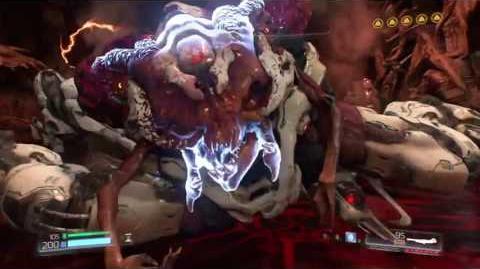