Super Gore Nest
The Spectre reappears once more in Doom Eternal. An 'ethereal amalgam' of the Pinky, Spectre's serve as a difficult to see threat midway through the campaign.

Born from an ancient screed of forbidden psychomancy, it was by the tomeic inscriptions of the occultic Six Sealed Eyes that the Spectre was made manifest. Divined in desecrated ruins untouched by light for an eternity, warlocks of an abandoned sovereign house unearthed the verboten scripture, seeking rebellion by means of black magick against the rule of the infernal Archdemons. By way of sorcery were numerous abominations and ungodly forms brought forth into the Hellscape - among them, the Spectre; an ethereal amalgam of the Pinky. For their role in these miscreations, the Archdemons would enact as retribution against its insurgents an unspeakable punishment, a decree of suffering that would be without end.

Essentially a translucent Pinky, the Spectre has no clear visible details aside from the displacement in the environment its presence provides. The only clearly discernible feature being a glowing pair of eyes. If killed without severely mutilating the corpse, it briefly becomes visible before its remains burn away. It is essentially identical to the standard pinky, but is notably missing its head armor, likely as a way of explaining its lower defense than its visible cousin.

Worth noting is that, in the model viewer, as well as on the collectible for the Spectre, its head has the same armor plating as the standard Pinky. The reason for this discrepancy is unknown.

Spectres behave in an identical manner to their Pinky relatives, charging at the Slayer from a distance and dealing massive amounts of damage.

However, they also have some notable differences. For one, their cloaking ability nullifies the effects of several weapon mods. The Heavy Cannon's Micro-Missiles and the Rocket Launcher's Lock-on Burst will not target Spectres, the Plasma Rifle's Microwave Beam cannot lock on to them, and the Super Shotgun's Meat Hook will not treat one as a target.

Fortunately, unlike the regular Pinky, Spectres lack any armor, meaning they can be fought head-on just like any other demon. This makes dealing with a charging Spectre less of a hassle, as the player can mow it down with the Chaingun or Plasma Rifle before it can reach them.

Additionally, their cloaking ability can be temporarily disabled with the Ice Bomb. This not only makes them easier to see and hit but allows lock-on weapons to target them as well, though this will be nullified once the freezing effect wears off. 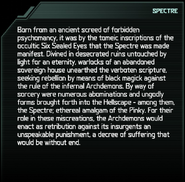 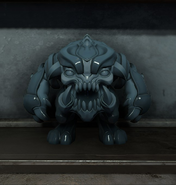