1994
Soldiers, aka Hell Soldiers, are a common Fodder enemy in Doom Eternal, replacing the Possessed Soldiers and Possessed Security in Doom (2016). Though similar in behavior and role to their direct predecessors, they have been heavily redesigned to closely resemble their classic counterparts.

Once frontline infantry fighting to protect Earth from the demon invasion, the Hell Soldiers have been claimed by darkness, turning them against their fellow soldiers in the midst of battle.

Cultist Base
Soldiers are divided into two variants: those equipped with "blasters", i.e. automatic plasma rifles, and those equipped with plasma shotguns and shields. Both variants bear certain similarities: glowing red eyes, torn flesh and bullet holes, battle-damaged combat armor over drab uniforms, and small jetpacks with which they can briefly leap to higher platforms. Compared to 2016's soldiers, they are markedly more "intact", without much of the melted flesh of their predecessors. Nonetheless, close inspection reveals skullish faces, torn lips, and withered fingers, indicating both battle damage and corruption has taken their toll on the soldier's body.

Blaster soldiers wear dark green buzzcuts, with tan and green battledress. They are equipped with a large cylindrical blaster, either covering or completely replacing their right arm from the elbow. This weapon fires red plasmoids, unlike the player's blue.

Shield soldiers are bald, with dark blue-grey uniforms and armor. Their weapons are stubby and tri-barreled, and fire spread-shots of narrow plasma bolts. They are most notable for the large blue holographic shield emitted from their left forearms, resembling a conventional riot shield in shape and marked with the UAC logo.

Soldiers are the only enemy in Eternal to speak (aside from the Pain Elemental[1]), as opposed to simply growling and moaning; in combat they shout short phrases in deep, distorted voices. These lines are spoken in an unknown demonic tongue; it is unclear whether the corrupted soldier themselves is speaking, or some controlling entity.

Soldiers are a tougher and more defensive counterpart to imps and gargoyles; they prefer to fight at medium to long range if possible, avoiding closing to melee. They will pursue the player if they lose sight of them, but only as far as is needed to open fire again.

Blaster soldiers run around the battlefield, seeking firing positions from which to engage the player. From there, they unleash barrages of plasma while either standing still or slowly strafing. While easy to dodge, their plasmoids inflict reasonable damage and can quickly kill the player in confined spaces.

Blaster soldiers are capable of charged shots, the probability of which increases the further they are from the player. When preparing charged shots, they brace their blaster with their left hand and lean onto their leading foot. Charged shots can be easily identified by their size and brightness relative to normal plasmoids; they are typically fired in threes, with shorter charging intervals between each. Charged shots, unlike normal plasmoids, are precisely aimed at the player's position; as soon as they travel the requisite distance they will rapidly slow down and then explode, dealing sizable splash damage.

Blaster soldiers are vulnerable to the Combat Shotgun; a single point-blank shot will immediately stagger them. The Heavy Cannon is also an effective weapon; a single Precision Bolt shot is sufficient. Being fodder, they only cost one fuel pip on the chainsaw. Flanking a soldier, faltering, or staggering them will cancel their charged attacks, and charged shots can be simply avoided by staying mobile in any direction.

Shield soldiers are either more or less dangerous, depending on the situation. As soon as they spot the player, they will activate their shields and slowly advance; they never lower their shields intentionally. Consequently, they struggle to keep pace with the player around the battlefield and can be safely ignored much of the time. Their weapon rapid-fires hitscan spreads of plasma bolts; it is extremely powerful and easily capable of killing the player in an unguarded moment. Fortunately, the plasma shotgun's range is extremely low, its shots terminating after only a short distance. Consequently, shield soldiers should never be approached at close range if possible; they are at their most dangerous in confined spaces, and vice versa in open arenas.

Shield soldiers are extremely vulnerable to plasma; sustained fire can overload their shields and cause a violent explosion, killing them and dealing heavy damage to any nearby enemies. Blood punches will immediately destroy their shields. Any other weapon is not advisable; the shield takes extreme punishment to disable, and they are only briefly vulnerable before bringing up a new, fresh shield. Grenades or rockets can deal splash damage if they strike the ground nearby, but direct hits to the shield will do nothing. Because shield soldiers are slow to turn, dashing around their flanks to attack their exposed backs is a valid tactic. Without their shield, shield soldiers have the same health and vulnerabilities as blaster soldiers. 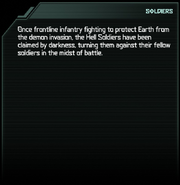 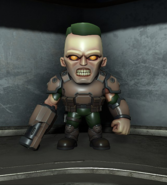 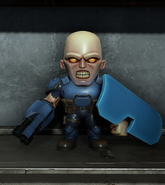 Concept art for the blaster soldier. The Doom 64 zombieman has been used for reference. This iteration of the Soldier has both a larger jetpack and what appears to be the player's Combat Shotgun, melted into their arm similar to the 2016 soldier's plasma rifle.
Community content is available under CC-BY-SA unless otherwise noted.