"I offer you a gift. Take it. It will give you strength...help you on your journey. And now they will fear you."
― Samur Maykr, leading the Doom Slayer to grant him power [src]

The Seraphim was a Maykr known as Samur Maykr, who was the overseer/guardian of the Doom Slayer.

According to the Ligria Sultagenta, Samur was chancellor to the Khan Maykr. During Argent D'Nur's war against Hell, Samur played a role in helping the Doom Slayer and his allies in stopping a major demonic assault led by a monstrous Titan known as the Dreadnought. After witnessing the Doom Slayer's prowess in battle, and acting on his own accord, Samur hurried the Slayer to the Chapel of Purity and submitted him to the Divinity Machine; granting the Slayer enhanced strength, endurance and agility. This allowed the Slayer to single-handedly defeat the Dreadnought. As Samur acted without the Khan Maykr's consent, his actions was seen as heretical and he was believed to have been exiled from Urdak afterwards.[1][2]

Prior to his disappearance, Samur stole the essence of The Father from Urdak, which damaged the Maykrs' Transfiguration process of voluntary death and resurrection, and prompted the Khan Maykr to siphon Argent Energy from Hell in order to sustain her race. The reasons for why he stole The Father's consciousness and what he did with it remains unknown.[3]

The Seraphim is mentioned in the Slayer's Testament, specifically his role in bestowing the Doom Slayer with "terrible power and speed" to use against Hell's forces.[4] He is depicted in a drawing from the "Book of Daeva" where the Seraphim is shown as a hooded figure watching as the Slayer fights with two Night Sentinels against demons that resemble the ones from the cover art of the classic Doom.

During the Doom Slayer's journey to Taras Nabad to recover his Crucible, he comes across the Chapel of Purity and the deactivated Divinity Machine; this prompts him to recall Samur (known as the "Hooded Figure") helping him into the Divinity Machine.

There are certain implications that Samur has a connection to Samuel Hayden. Their names are similar, and Samur's lines in the flashback mirror some of Hayden's from DOOM (2016). After bringing Hayden to the Fortress of Doom, VEGA states that the architecture of the ship is similar to Hayden's body, and the humans in the ARC Complex remark that Samuel's body is 'alien' - this suggests it was possibly based on reverse-engineered Maykr technology. Samuel also seems to have substantial knowledge of Urdak and even the Khan Maykr's weakness, as well as the portal systems in Urdak.

When the Slayer enters the Maykr facility with Samuel, the facility refers to him as the Seraphim. Furthermore, when VEGA is placed into an Urdak system, he asks Hayden if he is "the Father," indicating that VEGA may have been created from the Father's essence by Samuel after he stole it from the Maykrs. 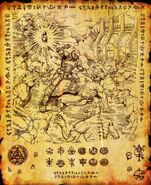 Script from The Book of Davea, showing the Seraphim in the upper left corner

Retrieved from "https://doom.fandom.com/wiki/Seraphim?oldid=135726"
Community content is available under CC-BY-SA unless otherwise noted.