Chairman of the UAC, Head of UAC Mars, Project Director of the Argent Facility

Samuel Hayden is the Chairman of the UAC who oversaw the Argent energy research projects at the UAC Mars Base. A supporting character in Doom (2016), he helps guide the Doom Slayer.

Samuel Hayden was born to the powerful Hayden family and was a very prodigious intellectual and philanthropist. After he was appointed as General Director of the Global Science Council, the UAC recruited him. Soon after Argent energy was discovered on Mars, Hayden subsequently took over the leadership of the UAC.[1]

After the Argent Tower was constructed in 2127, Hayden was diagnosed with an incurable brain cancer and left with a few months to live. Hayden avoided his death by transferring parts of his brain into a 3-meter tall mechanical body.[2] It was implied that Hayden chose this form for his expeditions into Hell. 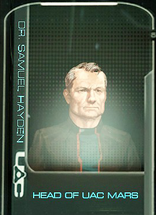 Hayden led the first manned expedition into Hell in 2145 in which he discovered the Doom Slayer, simply called "Doom Marine". He had the Marine recovered and kept him personally under his watch away from the auspices of his disgruntled colleague Olivia Pierce. Hayden's relationship with Pierce gradually deteriorated due to her deranged, religious obsession with Hell which ultimately corrupted her.

After Pierce betrayed Hayden and planned to open the gates of Hell, Hayden awakened the Doom Marine and tried to persuade him to assist him in stopping Pierce. However, he is harshly rebuffed twice at the beginning of the game, though Hayden claims to be willing to accept full responsibility for Hell's invasion. Hayden was able to gain the Marine's partial cooperation after cutting off his access to the satellite communications array and offering information that he seeks, although in their attempt to stop Pierce, the Marine later destroyed the Argent energy stations rather than temporarily disabling them as Hayden asked, much to Hayden's irritation.

Hayden eventually meets the Doom Marine face-to-face in his office following the latter's return from Hell and the destruction of the Argent Tower. He explained to the Marine about the ongoing demonic invasion of the facility through the still-open Hell portal, and the need to pursue a new way into Hell in order to locate the Crucible, an artifact that can control the source of Argent energy known as "The Well," and stop Pierce's plans. He instructed the Marine to go to the Lazarus Labs to find the Helix Stone and a powerful weapon.

But Hayden also intended to restart Argent energy production as soon as possible, but also knew the Marine would disapprove, as he demonstrated by his testy behavior at the Argent Facility. After the Doom Marine killed Pierce and stopped Hell's invasion, Hayden summoned the Marine to the facility via a dimensional tether. He then traps the Doom Marine, taking the Crucible from him to continue exploiting Hell's resources for the sake of humanity's progress. Hayden admitted that he cannot kill the Doom Marine, but he will not allow him to stand in his plans, before teleporting the Doom Marine to an unspecified location. Before he does so, however, Hayden states his certainty that he and the Doom Marine would meet again.

It is unknown as to what transpired over the next six to eight months since betraying the Slayer and confiscating the Crucible for his own designs.

Samuel Hayden is next seen hideously lain up, his mechanical body having been dismantled missing its right forearm and lower legs. Whats left of him is hooked up to a life support apparatus keeping him in semi-functionally active state as he is left defunct while surrounded UAC technicians studying his remains.

Retrieved from "https://doom.fandom.com/wiki/Samuel_Hayden?oldid=124958"
Community content is available under CC-BY-SA unless otherwise noted.