Reclaimed Earth
The Riot Soldier, also referred to as the Chaingunner or Trooper, is an enemy that appears in Doom Eternal: The Ancient Gods - Part Two, based on the Heavy Weapon Dudes from Doom II. It is functionally similar to Soldiers with their shield equipped, except that their shields, like the Blood Maykr’s energy shield, cannot be destroyed. They take additional damage from explosives and can instantly be dealt with by using Tactical Remote Detonate rocket explosions.

Like their fallen comrades in arms, the once heavy infantry of Earth’s defenses have now succumbed to the darkness. Now marching under the banner of the Dark Lord, they unleash a firestorm upon humanity, sentinels, and any other thing within their warpath. Emboldened by the blessed shields raided from Urdak, the riot soldiers firmly assert their dominance within combat.

The Riot Soldier appears to have been redesigned from its first appearance in Doom II, sporting heavy red armor and a black metal helmet that only exposes its eyes. It has a chaingun fused to its right arm, while its left arm carries a tower shield made of yellow energy.

The Riot Soldier is essentially an upgraded Shield Soldier that behaves in a similar manner. However, its shield is completely indestructible, and its chaingun must first spin up, then fires bullets at the player. The Riot Soldier can die to a well timed remote detonation rocket, and be put in a glory kill state with a Sticky Bomb. It is immune to headshots from any weapon due to its helmet. 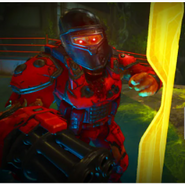 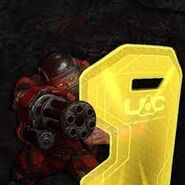