< Revenant
View source
watch 02:46
The Quarry - The Loop
Do you like this video?
Play Sound
Sub-Pages:

The Revenant is a returning enemy in Doom Eternal. While it retains its jetpack from Doom (2016), it has undergone slight design changes to more closely resemble its original appearance in Doom II.

The Revenant program, a bio-weapon experiment utilizing re-animated necrotic human tissue, was believed to have been destroyed with the collapse of the UAC facility on Mars. However, the emergence of the Cultist enclaves on Earth - former UAC deviations now under Hell's direct control - have begun work on a second wave of production of the Revenant program. While much of the platform's existing weapon payload is preserved as originally designed, the cyber-neural programming has undergone modification. Patterned signals are wired to the host's frontal cortex, which in turn stimulate a state of frenzied, unrestrained bloodlust. While these signals are active, the host is incapable of thinking or feeling anything but a singular compulsion to inflict death and violence on the living.

The Revenant maintains most of its visual design from Doom (2016), a tall skeleton combined with a UAC Jetpack and dual rocket launchers. However, the Revenant has also been 'tidied up' slightly, with less blood coating its body and cleaner bones making up its frame, making it closer in appearance to the original sprite from Doom II.

The Revenant's jetpack allows it to gain a lead on the player in a way few other demons can, targeting them from behind low walls and other demons, as well as allowing it to dodge out of the way of the Slayers weapons. The Revenant will cease using its jetpack if its rocket launchers have been destroyed.

There are several ways to take out the Revenant. The Slayer's own Rocket Launcher Lock-On modification can kill it with ease, able to keep up with it even if it flies into the air. While using its jetpack, the Revenant will take increased damage from the Ballista. Most notably, the player is able to disable its rocket launchers, greatly reducing its damage output and forcing it to get closer to the Slayer, making taking it down much less of a hassle. When one of the Revenant's rocket launchers is destroyed, it will falter for a moment, leaving a window of time for the player to quickly remove the second launcher with ease. The Rocket Launcher's Dual Lock can target both launchers as well as deal some damage to the Revenant.

The Revenant is also one of the playable demons in Doom Eternal's Battlemode. It has a base health of 2000 and serves as a glass cannon, hitting hard but not able to take much damage, relying on its flight ability and dashes to evade the Slayer's powerful weapons.

Revenant Specific End of Round Upgrades 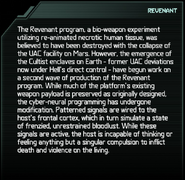 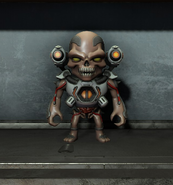