The Prowler returns as a single-player campaign opponent in Doom Eternal. Capable of teleporting around the battlefield, the Prowler is a difficult to track opponent that can catch distracted players off guard.

A creature of darkness, the Prowler hunts from the shadows, preferring stealth and concealment to open conflict. Imbued with parietal infravision, the Prowler is able to see that which is unseen to the naked eye. Known among the Sentinels as 'the Nightstalker', the Prowler's preternatural sense of sight makes it a lethal hunter, capable of tracking its prey even in the pitchest black of dark. Believed to be peripherally descendant to the lesser Imp brooding, the Prowler is rarely seen in groups, forsaking pack-hunting for the precision of the solitary pursuit.

According to the Codex entry, Prowlers are a possible descendant of the Imp breed, which would explain their similar hunched appearance and overall body structure. However, they are notably larger than Imps and are a dull purple color as opposed to the Imps more brownish-orange shade. The Prowler also has three, closely-knit red eyes and a tri-segmented jaw.

Prowlers will behave similarly to Imps, zipping around the battlefield while hurling purple fireballs at the Slayer. However, they will also regularly teleport both towards and away from the Slayer. This teleportation ability can make the Prowler hard to track, as the distance they travel with their teleportation can vary from a few feet to half of an arena.

The Prowler will frequently teleport behind the Slayer to unleash a rapid barrage of swiping attacks before teleporting away to repeat the cycle once more.

The Prowler's teleportation ability can be bypassed/neutered in a few ways. The Ice Bomb is capable of freezing the Prowler in its tracks, keeping it immobile, and preventing teleportation. The Lock-On Burst attachment for the Rocket Launcher will track it constantly, even after teleporting, removing it from the battle without much fuss. A popular method of taking it out is using the Super Shotgun's Meathook to latch onto it; holding the Prowler in place and gibbing it for a free supply of armor. A shot from the Ballista puts it into a stagger state and one charge of the Destroyer Blade mod outright kills it.

Using a regular Ballista shot on the Prowler will instantly stagger it, a skilled player is able to avoid the Prowlers attacks with ease and may chose to leave them alive to function as health packets. Blood punching the often also will cause it to stagger. Using the ice bomb is an effective weapon against the Prowler as it freezes it in place. 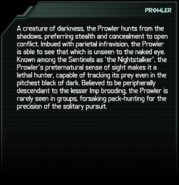