< Pain Elemental
View source
watch 02:46
The Quarry - The Loop
Do you like this video?
Play Sound
Sub-Pages:

The Pain Elemental, sometimes called Pain for short, makes a return in Doom Eternal. While mostly similar to its depiction in Doom II, it has undergone several visual and behavioral design changes.

An abhorrent creation of the Umbral Plains, the Pain Elemental is descended from the primal, abominable depths of the demon world. Knowing only its own torment, the Elemental is cursed to forge Lost Souls within the fiery pit of its gut--a process that is excruciating and without end for the duration of the creature's miserable lifespan. The Elemental's only reprieve from its own agonizing and torturous existence is the projection of suffering into the world. For this reason, the Pain Elemental reaps great satisfaction from indiscriminate killing and the infliction of misery upon those weaker than itself.

The appearance of the Pain Elemental is mostly similar to its original design, but it has undergone several notable changes. For one, its jaw has now been separated into a human-like one surrounded on either side by several well-articulated mandibles, each capable of individual movement. Its body has also become more narrow, losing some of the bulk from its original design. The Pain Elemental's horns have also become noticeably larger, with several smaller sets of horns stubbling its brow and scalp, almost resembling scant hairs. Its eye has also been changed, with its pupil going from black in color to a glowing orange. It's rear end has been changed from a generic mass of flesh to something resembling the armor of an Armadillo. The Pain Elemental's arms are also far larger and longer, three claws at the end of each.

The Pain Elemental serves as a bullet sponge, requiring concentrated fire to take down. The Ballista deals increased damage against them, but several bolts will still be required to take it out. The Meat Hook on the Super Shotgun can also allow the player to get up close and deal high amounts of damage. The Lock-On modification for the Rocket Launcher can deal significant amounts of damage, but at least two bursts are needed to kill it. Otherwise, just avoid its barrage of Lost Souls and pound it with everything you can until it goes down.

The Pain Elemental is also one of the several playable demons in Doom Eternal's Battlemode. With a base health of 3000, the Pain Elemental serves as a bulky aerial pressure unit. It is capable of soaring over the arena, placing hazards in strategic positions that's not possible with the other demons, and hurling Lost Souls at the Slayer. However, it lacks many mobility options, and it is frequently unable to hide behind cover in as effective a manner as the ground demons. It also somewhat lacks damage output, with its Lost Souls not dealing a lot of damage to the Slayer. 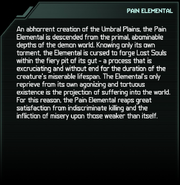 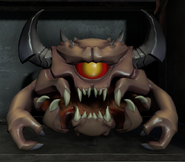