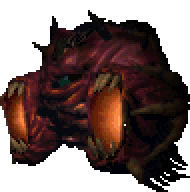 The Pain Elemental appears in Doom 64 in its own unique variation.

The Pain Elementals of Doom 64 are the resurrected carcasses of the Cacodemons from Doom 1 (or presumably those found in Ultimate Doom levels of PSX/Saturn at least), resurrected by the Mother Demon. They are made from systematically altered dead carnage remade back into corrupted living tissue. The mutations were devastating. The demons have returned stronger and more vicious than before.

By far the most annoying and powerful demon in all of hell (not counting the Mother Demon). Why is this bad boy so darned powerful? Is it the name? No, it's the fact that he is not only seems more crafty than his distant cousin, the Cacodemon, he also shoots Lost Souls from the mouths he has on each of his "hands".[1]

With further altering from mutations it is colored dark pink (like the original Cacodemon; the Doom 64 Cacodemon is colored beige brown and had two arms), has a green eye and and each of its large bony arms and hands grasps two mouths so it can now spawn two Lost Souls at the same time. Its back has a large horse-like black mane. It gives off a low sinister laugh when it has sighted the player, sounding very close to a garbled, demented command of "DIIIIE!"

Unlike other versions of the game, standing at point-blank range to prevent it from spawning Lost Souls is not a viable option; each Lost Soul that fails to materialize will cause a significant amount of damage, comparable to an exploding barrel - getting hit by both is roughly the same as being hit by a rocket (this makes the Pain Elemental very effective at monster infighting as well). This extends to the Lost Souls it spawns during its death sequence as well.