"I believe in honesty...especially now, in what will be your final moments in this world. All the rumors...the human sacrifices...the Hell portal...the demons...it's all true. My sisters and brothers, be thankful. You will be the first. You will have a seat alongside them just as I will in what will become the new world that they create for us. Starting now."
― Olivia Pierce [src]

Olivia Pierce is a high-ranking researcher of the UAC and the main antagonist of Doom (2016). She was the Head of Biochemical Research at the Argent Facility on Mars and a fanatical researcher of Hell. After coming into contact with Hell's Dark Lord, Pierce made a pact with Hell to aid in their invasion.

A former protege of Samuel Hayden, Olivia Pierce was graduated with first class honors in biomechanical and genetic engineering in Strasbourg. After graduating, she was appointed to the Global Science Council and made a fortune by becoming one of the founders of a global research company called NanoStruct Aerospace and Defense Systems.[1] During her two-year tour of duty with the Global Science Council, Pierce once served as a missionary in South America in which she described her experience as a "spiritual but frivolous pilgrimage."[2]

Pierce initially rejected Hayden's offer to join UAC as she had no interest in the energy business until her former mentor gave her an artifact, the Helix Stone, from the Argent Fracture. Soon becoming obsessed with the artifact, which slowly corrupted her mind, Pierce made her decision to join the UAC's Lazarus Project as its Head Director after relinquishing her hold on her company.[3]

After a few months working in the Argent facility, Pierce suffered from idiopathic scoliosis due to her long-term exposure to Hell, causing her to be bound to a wheelchair. In order to regain her freedom of movement, she agreed to take an experimental augmentation surgery which involved grafting a titanium exoskeleton to her body to replace her damaged spinal function. Despite regaining her ability to walk, moving causes her a tremendous amount of pain due to a side effect of the procedure. However, Pierce refused to take painkillers, believing the medicine would cloud her mind.[1]

Along with Samuel Hayden, she was responsible for studying Hell to solve the human energy crisis. Ultimately, desperate to cure her terminal illness, she made a deal with an unseen demon lord to aid in Hell's invasion of Earth in exchange for great power - not just curing her of her illness, but in her words "becoming a god." Pierce soon formed a demon-worshipping cult within the UAC, promising her followers a place in her "new world"; in reality, Pierce was only using her followers as disposable minions to serve in her selfish desire for godhood.[4] Using the Lazarus Project's research, Pierce gave cybernetic augmentations to demons, creating horrible techno-monsters to bolster Hell's army, such as the Revenant, the Cyber-Mancubus, and "Specimen CD587-1", better known as the Cyberdemon. All the while, she made plans to use the incredible power output of the Argent Tower to create a permanent gateway to Hell. During this time, Dr. Pierce's occult obsessions were initially tolerated by Hayden and the UAC board due to still getting results on the projects she'd been assigned, but over time, as she focused more and more on the coming apocalypse she planned to unleash, her relationship with Dr. Hayden worsened as the latter became very suspicious of her intentions.

Pierce was also tasked by her demonic masters to ensure that the location of the Doom Slayer's sarcophagus remained a permanent secret. However, she was unable to prevent Hayden from somehow finding the Slayer's sarcophagus in the Kadingir Sanctum. Despite untold numbers of demons rushing to defend the sarcophagus and slaughtering the entire expedition save for Hayden himself, Hayden succeeded in acquiring the sarcophagus and bringing it back to Mars as a contingency plan against Hell. Pierce was then berated by her demonic master for failing them, to which she insisted that it wasn't her fault that Hayden found the Slayer, and promising that their plans to open the portal will go on unimpeded.

Pierce inevitably used the Argent Tower to allow the demons to invade the facility, as she released a "hellwave" from the Lazarus Labs, used the remote killswitch to wipe out all of the Elite Guards, and caused a majority of UAC personnel on Mars to fall into demonic possession. For good measure, she also released hundreds of captive demons from the Lazarus facility's holding cells upon her former co-workers, including all of her cult members. In response, Hayden sealed himself up in his secure office in the Advanced Research Complex and remotely opened the sarcophagus, reawakening the Doom Slayer to stop Pierce and the demonic invasion.

Pierce first met the Doom Slayer himself face-to-face from behind a bullet-proof window in the Foundry. She locked out VEGA from stopping her from overriding the Foundry as she rerouted the facility's power to the Argent Tower in order to enlarge the Hell portal. Before heading to the Argent Tower, Pierce tells the Slayer that he "could not have saved them anyway." When the Slayer destroyed the Argent energy induction filters powering the tower, Pierce salvaged the situation and forced the portal back open using an Argent Accumulator, whereupon she - and, unintentionally, the Doom Slayer - were transported to Hell.

By the time the Doom Slayer caught up with her at The Well, she is shown bloody and severely weakened. Pierce realized too late that Hell has deceived her and mutters her last words to the Slayer, "They promised me so much." The demonic forces of Hell then strike her with a crimson lightning bolt, keeping their promise of godhood - in their opinion - by merging her soul with that of an ancient, powerful demon, and transforming Dr. Olivia Pierce into the Spider Mastermind. Before the Mastermind had time to gain its full strength, it was immediately confronted by the Slayer, and after a furious battle, the Doom Slayer killed the monster with a BFG blast to the mouth, ending the threat of the Spider Mastermind and destroying anything that was left of Dr. Olivia Pierce once and for all.

Olivia appears as a statue that the Slayer has to knock down to proceed in the final area of Nekravol. 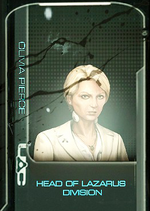 Olivia Pierce is a Caucasian British woman that appears to be aged somewhere between her late 40s to early 60s. She has white hair cut very short and wears a light gray exoskeleton. She appears sickly and almost emaciated, being very thin and and short of stature compared to the rest of the game's cast.

Near Samuel Hayden's office level in the UAC Mars base, there is a digital photo of her younger self hanging on the wall, where she has short blond hair and wears a typical scientist lab-coat and jewelry.

Olivia Pierce's private office, with the Demon Destruction game on the right.

Olivia in the Argent Tower.

Olivia in The Well.