The Night Sentinels were a warrior caste of Argent D'Nur who were originally formed to serve the King of the Argenta and protect the Wraiths.

The Night Sentinels were formed by the first King of the Argenta, Ormero the Father. They became the guardians of the Wraiths, and acted as both their holy servants and a bridle for their awesome power, while the priests of the Order Deag would see over the veneration and worship of the creatures. In addition, the Night Sentinels served as the royal guard of the King and swore fealty to him.[1]

The Night Sentinels, like other Argenta, accepted the Maykrs as their gods after the arrival of the creatures, but continued with their duties towards the Wraiths. They fought on the frontlines of the invasion by the forces of Hell at Taras Nabad, and proved instrumental in keeping the demonic hordes at bay. When the time came to take the fight to the enemy, the Night Sentinels took their campaign to the very shores of Hell itself, even Titans falling before the strength of their Atlan war machines.[2]

During this time, the "Outlander," a strange man from a strange world, was allowed to join the Night Sentinels as no outsider ever had before. This was due to his apparent insight into the nature of the invaders, which was initially the subject of suspicion. However, King Novik himself accepted the stranger into the Night Sentinels, and he soon fought alongside them, lending his unmatched tenacity and ferocity to their cause.[3]

As the war against Hell raged on, the Night Sentinels were the only members of Argenta society to reject the "Elixir" which had been created though the study of the invading demons.[4] They were also the first to discover the mechanism of its creation when they encountered mighty towers being constructed in Hell by Argenta slave labor, and uncounted innocents put to torture to be harvested for Argent Energy.[5] Their attempts to report this horrific discovery fell on deaf ears, and even some of their own ranks refused to accept it was their place to question the actions of the Khan Maykr. This sowed the seeds of a civil war among the Argenta, with those loyal to the Khan Maykr denouncing the Sentinels and the King, even discarding their oath to the Wraiths in the process. When these traitor Sentinels were cut down in battle, they were resurrected in the form of Marauders.[6]

Those loyal to the Wraiths drew up a twofold plan: the Night Sentinels would enter Hell in force and cast down the Soul Spires in order to cut off the flow of Argent Energy to Urdak, while others would wake the sleeping Wraiths to inspire the people of Argent D'Nur with their Wraithcall.[6] In both parts they were betrayed.

In the former case, the priests of the Order Deag had secretly sided with the Maykrs while feigning loyalty to the Night Sentinels. When they opened a portal for the Sentinels to invade Hell, rather than appearing as a unified force they were scattered, embattled from all sides by the legions of Hell with their way back barred even if they could reach it. All who took part in the ill-fated expedition perished save for one, the man they once called Outlander, who the demons would come to know as the Doom Slayer.[7][8]

The second betrayal was if anything greater still: a Night Sentinel Commander, Valen, was informed that his deceased son faced eternal torment in Hell, with Deag Grav promising an end to the young man's imprisonment and his rebirth if Valen would assist the priests. Haunted by his son's torture, he eventually gave in, allowing the High Priests of the Order Deag access to the slumbering Wraiths. The mighty beings were dragged down to Hell to form The Well, and as his "reward" Valen's son was indeed reborn. However, this was merely one final act of cruelty: the boy's heart used as the core of the Titan known as the Icon of Sin. For this, Valen's name was cursed and he was only known by the epithet "the Betrayer."[7]

With the Sentinels all but destroyed and the Wraiths imprisoned, Argent D'Nur fell to Hell's forces with large sections of the planet outright dragged into the land of the demons. Those sections that remained fell into ruin: the spirit of King Novik haunting a throne room in Exultia, while a small cadre of Sentinels remained in Sentinel Prime overseeing the Arena there, now host to the cruel amusements of Deag Grav rather than honorable combat.

Of the loyalist Sentinels, only ghosts appear to remain, lingering throughout the world. These spirits still seem able to recognize the Slayer as he goes about his dire mission, bowing in respect to the single Sentinel who carries the banner of all. However, The Ancient Gods - Part Two reveals that a few clans of loyalists remain on Argent D'Nur, forced into hiding to avoid slavery and death. When the Doom Slayer lights the Torch of Kings on his way to The World Spear, the Sentinels realize that their corrupted leaders have been slain and someone seeks to avenge their culture by destroying Hell at its source; this inspires them to muster their remaining forces and join the Slayer's assault on Immora.

Night Sentinel equipment is a fusion of high technology and deeply held tradition, with swords and shields supplemented by spears with energized blades and a powerful long-range firearm known as the Ballista, a match for the performance of a top-of-the-line UAC Gauss Cannon. They were a spacefaring force with access to large capital ships built using Maykr space-folding technology, allowing them to move vast distances without the need for conventional engines.

Their Atlan war machines were bipedal weapons resembling their traditional armor, and armed with a scaled-up version of their standard energy lance, as well as a shoulder-mounted beam cannon and the ability to shoot powerful blasts of energy from their palms. The Atlans ran on Wraith energy rather than Argent, with power supplied by a series of large power cells. They are also shown to possess hovertanks.

The Night Sentinels have also tamed the dragons of Argent D'Nur for use as war beasts.

The Night Sentinels swore fealty to the King and Wraiths, and were an order of warriors first and foremost, focusing their minds on perfecting the art of conquest and training their minds and bodies to martial perfection. The order was an exclusive one, with outsiders never permitted to join the group no matter their achievements.[3]

The Night Sentinels apparently possessed a group of "Inquisitors" within their ranks tasked with dealing with those of suspect character, who reported their findings directly to the King.[3]

As protectors of the Argenta, the Night Sentinels were venerated in statuary. Statues of Sentinels in armor can be found throughout the remaining regions of Argent D'Nur. Samuel Hayden's office on Mars included two such statues arranged either side of a statue of the Praetor Suit.

As nominal leaders of the Night Sentinels, the three named Kings, Ormero the Father, Etrex and Novik, were members. Among their rank and file, three are named in the Ligra Sultagenta: a Banner Sergeant known as Lord Sash, Roan the Mighty, and Gor.[8] The two named survivors of the group are Commander Valen and the Doom Slayer himself. 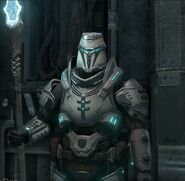 A Night Sentinel Elite guarding the city of Sentinel Prime in Doom Eternal. 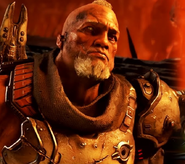 Slayer and The Night Sentinels

Retrieved from "https://doom.fandom.com/wiki/Night_Sentinels?oldid=142013"
Community content is available under CC-BY-SA unless otherwise noted.