The Mother Demon or Mother of all Demons, is the final boss of Doom 64 and is found on MAP28: The Absolution. You do fight the same monster type in the Lost Levels MAP39: Final Judgment, but that is actually the sister named Resurrector who wanted revenge. Oddly the Mother Demon is implied to be weakened by the explosion that bombarded Phobos and Deimos. However this was not the case for her sister Resurrector. The odd thing is, is that despite one being crippled, they both have the same stats. It is possible that while the two use the same sprites that they are not exactly the same type of demon. With the Mother Demon being more powerful and the Resurrector being only as powerful as the Mother Demon in her crippled state.

The military episodes code named "DOOM' were not actually completed: A single entity with vast rejuvenation powers, masked by the extreme radiation. In its crippled state, it systematically altered decaying dead carnage back into corrupted living tissue.

The mutations are devastating. The demons have returned even stronger and more vicious than before.

A monstrosity in her own right, the Mother Demon appears as a large demonic larva with dead black eyes with red irises, four arms, a skull-like face and smallish mouth filled with many long, sharp teeth. It has no wings, yet moves by floating around. She makes a soul-chilling cry of discovery upon being roused, a ghastly snarl when moving about and a frightful shriek like a Banshee when she is damaged.

The Mother Demon's attack consists of powerful flame trails, followed by a set of 4 homing fireballs which split up when they hit something.

In the backstory, the Mother Demon appeared in an old relay satellite, battered by neutrons and quarantined by massive levels of radiation. When her presence was made, the satellite activated and sent a message to Earth. Her presence came with many demons and though their energy signatures were caught, the Mother Demon used the radiation levels to escape detection. She has rejuvenation powers and whenever she walked by a corpse of a demon, it was brought back to life. It also made them stronger than before.

After she is killed, the Marine decides to remain in Hell to ensure no demon ever rises again.

The Lost Levels, available only on the re-release of Doom 64 via Doom Eternal package, continues the story of the Doom Marine and how it ties up to the current Doom series. The sister Resurrector wants revenge against the Marine and tries to kill him.

The Mother Demon will kill the player quickly if coming in battle unprepared. Her flame trail, when hit, launches the player into the air, making it harder for the player to control their movements. At the same time, she will wide launch four Revenant-style homing missiles to the at the player, being the only monster to perform two ranged attacks at the same time. Even though one homing missile is not as strong as one rocket, getting hit by one of them will bounce the player back pretty far and getting hit by all four of them at once can be fatal regardless of the player's health and armor levels. Though the player can still hide on the walls like how the player fight a Revenant, dodging the missiles can be a hassle, especially when hit by either attack and the wide open space of the arena. There is also no limit on how many homing missiles are simultaneous on-screen.

She is the fastest demon in Doom 64, moving just as fast as the player, and can catch up to the player in seconds, unless the player is using the neutral position reset which makes the player run extremely fast.

However, if the player did not receive all three of the Demon Keys needed to fully equip the Unmaker, the battle against the Mother Demon is very difficult. To make matters worse, varying upon how many keys the player collected if they did not collect all three, their previous battle before facing her may have consumed a lot of ammunition. You have options:

While this boss is called the sister Resurrector, this is indeed the same battle style as the Mother Demon. Due to the levels' structure, this is a much easier fight:

You can instantly kill the Resurrector with just the Unmaker before she enters the teleporter by going to the gap immediately after the doors are opened and just blast through the Unmaker, as long as you have around 150 plasma cells. To reduce even more concerns with this method, her flame trail cannot go through the gaps, marking you safe from any of her attacks.

In Doom (2016) in the main room with the tanks filled with demons and in the room behind Dr. Olivia Pierce's office where you can find the Soul Cube (which is unusable) and the hologram of the Doom Slayer's tomb along with his suit, you can find a fetus version of what looks similar to the Mother Demon. These creatures are located in the tank closest to the Soul Cube but does not move or attack as she is not fully grown. These appear to be immature versions of the gremlin or the Abaddon pilot seen in the Art of Doom, but those creatures especially one form of the Abaddon Pilot look to be inspired by Doom 64 Demon Queen.

While this thing doesn't look exactly like the Mother Demon, having a slightly different head (one that actually resembles more that of the Spider Mastermind or Arachnotrons). It does appear to have evidence of multiple arms in development, possibly four.

The final boss of Half-Life, Nihilanth, somewhat resembles Mother Demon. Like Mother Demon, Nihilanth has multiple arms, vestigial legs and an oversized head, and attacks with volleys of homing projectiles. 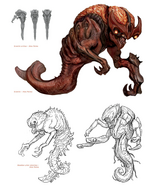