15 [Nightmare]
The Maykr Drone is a new enemy in Doom Eternal. Servants of the Khan Maykr, they serve as a late-game threat to the Slayer's quest to cease the demonic invasion of Earth.

Urdak's population is mainly comprised of Drones, beings that exist as extensions of the Khan Maykr's will. Though each is endowed with their own unique identity they remain biologically unable to resist a command from their Khan, and so function in a perfectly synchronized colony system. Drones never leave Urdak, their bodies not yet mature enough to avoid harm while crossing dimensions.

The Maykr Drone has a vaguely humanoid shape, though it completely lacks arms and floats above the ground. Tentacles can be seen drooping out from under the Drones robes. The robes themselves are made of Maykr technology, which provides them with their higher than normal defenses to the body. During the battle against the Khan Maykr, a unique variant of the Maykr Drone with red robes will patrol the battlefield.

The Maykr Drone possesses a protective hide which negates half of the damage from attacks to its body. The Drone will hover around the battlefield, shooting quick bursts of yellow light at the Slayer from a distance. Up close, the Drone will spin quickly as tendrils of golden energy whip the Slayer.

The Maykr Drone's head presents a significant weakness. Not only is it vulnerable to damage, if the killing shot is a headshot, the Maykr Drone will drop a payload of health and ammo, making them very useful for a Slayer in a pinch. The Precision Bolt mod on the Heavy Cannon or the Ballista's primary fire can kill a Drone in one headshot, making them effective means for removing the Drone from the battlefield quickly from any distance. "Quick Scoping" by entering the Zoom function of the Precision Bolt mod and immediately firing should result in an instant headshot and kill if the player is aiming close enough to the Drone's head.

Without Quick Scoping they can be somewhat difficult to hit, however, as they will dance out of the way of the Slayer's aim.  A point-blank Super Shotgun aimed at the neck will kill a Maykr Drone and trigger headshot loot drops, and using the Meat Hook to stun them and close distance makes this relatively easy. 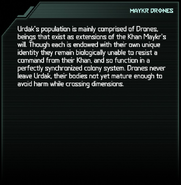 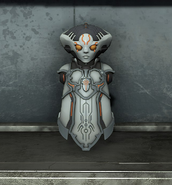 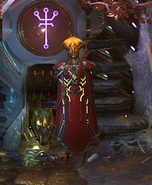