The Maykrs are an advanced extra-dimensional race that hail from the realm of Urdak. They are a hive-mind race, lead by the Khan Maykr. The Maykr species is believed to be ancient, and they generally consider themselves to be gods and far beyond the lives of other species, whom they refer to only as 'mortals.' They first appeared in Doom Eternal.

Visually, the Maykrs resemble humanoid beings with two arms each ending in three to five digits. The lower section of the Maykrs’, however, is split into several tendrils or tentacles. Much of the Maykrs’ physiology varies dramatically depending on their class or age, with younger and lower subvarities such as the Maykr Drones having no visible arms and being far smaller than 'higher' Maykrs.

While normally covered entirely in white and gold armor plating, the Maykrs are actually flesh, despite them generally being referred to as 'ethereal beings' by other civilizations. Their skin is pinkish and their features seem to be reminiscent of many demons, or at least this is true for the Khan Maykr. This includes a maw of sharp teeth, little subdermal fat tissue, four sets of yellow eyes and an exposed cortex. It is possible, however, that the appearance of the Khan Maykr has been corrupted by the use of Argent Energy—since similar features can be observed on corrupted humans and the Argenta.

The Maykrs are an exceptionally long-lived race, but they are not immortal; by the end of their lifespan they inevitably suffer from some form of biological and mental degradation, at which point they undergo a process known as 'the Transfiguration' wherein they allow a voluntary death and resurrection somehow tied to the Father. This process, however, was compromised by the absence of the Father's essence, leaving the Maykrs fearful of losing their wisdom and faculties.[1][2]

The Maykrs are an incredibly advanced civilization, with technological abilities far beyond both the people of Earth and Argent D'Nur. They have used this technological superiority to subjugate and essentially vassalize 'lesser' civilizations, posing as their gods and offering technological enlightenment and the questionably accurate 'life after death' in return for other species' servitude. In-game codex entries suggests they may have done this to multiple civilizations across the entire galaxy, which may include Earth during ancient times, for millions of years. The most notable case are the people of Argent D'Nur, or Argenta, with whom the Maykrs formed a very close alliance with some time ago.[1]

According to the Maykrs' legends, their progenitor was an alien entity known as the Father; this great being is said to have either been "split" to form the Maykr race, or to have transferred his incalculable power into the vast structure known as Urdak which then birthed the Maykrs in perpetuity. There are no records of how the Father came to the Maykrs or if it had any physical form before the Maykrs. What remained of the Father is his essence that resided in a temple-like building, the Luminarium, where Maykrs would go to seek answers.[1]

The Maykrs’ society is a form of hive-mind, with individuals that are more-or-less independent but obliged to always follow the will of their leader - the Khan Maykr. The Khan Maykr has a lifespan of around 10,000 Earth-years, and once the Khan Maykr dies a new one will be formed through an unknown process believed to involve the fusing of several lesser Maykrs. This process could only be done via the help of the Father's essence. At some point, the essence of the Father was stolen by one of the Maykrs' member known as the Seraphim for unknown purposes and its whereabouts was never recovered; this incapacitated the Maykrs from creating a new Khan Maykr.[3] This is catastrophic for the Maykr race since their race would eventually lose their leader and possibly even go extinct if it weren't for the use of Argent Energy. Dr. Samuel Hayden have described the Maykrs as a dying race, and it is possible that they cannot reproduce at all, being completely dependent on Argent Energy in order to prolong the lifespans of already living Maykrs, and most especially from succumbing to Transfiguration.

In order to secure a supply of Argent Energy, the Maykrs has taken to invading other planets or dimensions to harvest the energy of other lifeforms. The Maykrs betrayed the people of Argent D'Nur and allied with the forces of Hell—in exchange for a limitless supply of Argent Energy, the Maykrs would help the demons with the process of harvesting other races and harvesting their life essence, their souls, and further expand the dominion of Hell.

The Maykrs show little to no remorse regarding the billions of lives that are lost in the process of sustaining their civilization and will stop at nothing to enable the complete consumption of entire planets for their own good. The Maykrs are also extremely arrogant and due to their technological superiority and Argent-induced immortality they generally view themselves as gods. For this reason, they consider themselves entitled to the sacrifice of other races - that other races must pay penance to them and that they should be honoured to do so.

The Maykrs' civilization inevitably came to an end due to the actions of the Doom Slayer during the Hell invasion of Earth orchestrated by the Khan Maykr to harvest the souls of the human race. The Doom Slayer's disruption of the invasion forced the Khan Maykr to awaken the Icon of Sin to continue consuming the human race. However, the awakening of the Icon of Sin became the Maykrs' own undoing. The Slayer broke the Icon of Sin free from the Maykrs' control and subsequently breaking the seal blocking Urdak from Hell, allowing the demons to reject their pact with the Maykrs and invading Urdak. The once holy realm fell into chaos and the Khan Maykr died at the hands of the Slayer. What remains of the Maykrs fell to the corruption of Hell and turning into demons.[4]

Maykr technology is complex, sophisticated and generally very refined. Most things made by the Maykrs tend to be white with gold and red metallic details. This includes buildings, weaponry and their armor. In Urdak, it can be seen that the Maykrs enjoy mixing elements of their culture with natural elements of rock and foliage on what is most likely their homeworld. Most Maykr buildings are also richly adorned with various details and embellishments, statues of themselves, golden symbols from their language and more.

For some reason, the Maykrs choose to wear human-like facial masks that conceal their otherwise rather alien features. It is possible the Maykrs wear these as a social adornment due to their long history with the people of Argent D'Nur, since the narrow facial features and somewhat angled eye placement resemble theirs. In that case, the mask would possibly make the Argenta more inclined to believe the Maykrs are gods, rather than aliens. It is also possible this is the Maykrs’ original appearance, but that countless of years of sustaining themselves on Argent Energy has corrupted their features.

The Khan Maykr, leader of the Maykr species 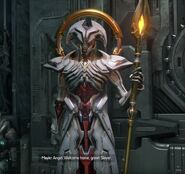