"You were never one of us. You were nothing but a usurper, a false idol. My eyes have been opened. Let me help you to see, Slayer."
― A Marauder addressing the Doom Slayer

The Marauders are enemies which appear in Doom Eternal, as well as both of its subsequent DLC releases.

A group of resurrected and corrupted Night Sentinels, the Marauders are those who sided with the Khan Maykr and the Hell Priests against the realm of Argent D'Nur, becoming demonic sentinels after their deaths. As former members of the Doom Slayer's personal band of warriors, they have access to a wide range of very powerful techniques that make them arguably one of the most challenging foes the player will face over the course of the campaign.

As civil war consumed Argent D'Nur, the Night Sentinels Guard was quartered by their faith. Torn between serving the Khan Maykr or revolting against that which they swore to protect. Those most disillusioned forswore their oath to the Sentinel royalty, abandoning their pact of allegiance made to the throne. These hardened warriors joined the separatist group led by the exalted Priest class, allying themselves with the Maykrs and their devout acolytes in an attempted coup against the Sentinel royal house. Those Sentinel warriors who fell in battle, having sided with the Maykrs, were ultimately denied finality in death. Resurrected by the Divinity Machine of Maykr design, these fallen Sentinels were returned from the dead, transformed by Hell's power, and recreated with a singular purpose: to hunt the Slayer, now reborn as Knights in Hell's army.

The Marauders are humanoids wearing Sentinel armor. Their armor is an earthy green, with a plate on the left of their chests, with a red glow on the left side. Their upper under-armor seems to have been torn away, as some shreds can be seen from underneath their ammo belts. The lack of under-armor reveals their chests, with deathly-pale skin and visible veins. They have a larger pauldron on their left shoulder, and heavier armor down their left arms, suggesting they are primarily right-handed.

They wield large battle axes of Argent Energy, making them look similar to the Slayer's Crucible. They also have a double-barreled shotgun, which they holster on their left leg when not using. When attacked, they put up a red, spiked shield of Argent Energy, which looks similar to both their axes, and to a Shield Soldier's shield. The upper-center of their shield has their Sentinel symbol.

Because they were resurrected, their skin is pale-white, and their visible facial features resemble a humanoid skull. They have a set of upwards-curving horns on the top of their heads, and two downwards-curving horns on the sides, with a row of spikes going down the center of their heads. Their eyes also glow a deep red, not dissimilar to the Hellified Soldiers. Their right hands have long, sharp, claw-like nails.

To effectively duel with a Marauder, the player must understand the spacing gimmick that revolves around them. At longer distances, a Marauder will hurl a beam of energy at the Slayer. At close range, they will fire upon him with their double-barreled shotgun. And at medium distances, a Marauder will lunge at the player with his axe. Marauders will also summon a wolf to chase the Slayer after absorbing enough damage with their shield; both the Slayer's and other enemies attacks will count towards this.

The player must keep combat with a Marauder at medium distances, for a Marauder is only vulnerable to attack when he is mid-lunge. The player can tell a Marauder is about to lunge at the Slayer when his eyes flash green and a sound cue plays. During the window in which a Marauder is lunging at the Slayer, hit him with a powerful weapon such as the Super Shotgun or Ballista to falter him for roughly a second. This gives the player just enough time to follow up with a second shot before the Marauder recovers. Repeat this cycle several times and the Marauder will fall.

Marauders are incredibly durable and notably are immune to both the Ice Bomb and Chainsaw. They will also use their shields to block the BFG's tendrils, negating damage from it, though as they are occupied with the projectile, a window of opportunity to attack a Marauder from behind is open to the player for as long as the projectile is in range. However, it is possible to kill them with a point blank BFG shot after a falter, but this won't be possible until after the player has beaten the Marauder mini-boss fight at least once. Marauders can also block the Crucible's swing, making them virtually impossible to kill with the Crucible unless the Marauder is staggered first, but even then it would be a waste as killing a non-boss demon, though it is not impossible to kill them this way when they are instead faltered, as shown in this video.

Despite this, Marauders will not block splash damage from explosive projectiles, such as rockets or sticky-bomb grenades, unless the projectiles hit them directly. This means that an alternate strategy to defeat a Marauder is to keep at relatively long range and shoot explosives at the ground in the Marauder's proximity - or ideally - directly in his path towards the Slayer. This is because of how indirect damage will not trigger the Marauder's block ability. This strategy is particularly appropriate for scenarios where large amounts of other enemies makes it hard to focus solely on a Marauder.

The Marauders are one of the most dangerous and challenging enemies in Doom Eternal, requiring the player's attention at all times. However, keeping your surroundings in your peripheral vision is just as important; focusing too much on a Marauder can allow for an opening for another demon to kill the Slayer.

As long as the Marauder is not doing it's swinging axe attack at the player, it will Auto-Block any shot fired at it from any gun. It should also be noted that the Marauder simply will not do it's axe-lunge unless it is in mid distance of the Slayer, so strictly keeping in mid-distance is essential. Once caught, "Hot Swapping," switching back and forth and firing the Double Barreled Shotgun and Ballista will greatly reduce the number of cycles it takes to defeat a Marauder.

If the Player manages to sneak in a Shockwave from the Plasma Gun during Hot Swapping, they can double their Hot Swapping Window as the Shockwave can paralyze the Marauder for a few seconds if hit successfully.

The Sentinel Hammer is a very valuable tool when facing a Marauder. After dazing the Marauder, immediately use the Sentinel Hammer to prolong it's dazed state. This will allow you to get several more shots in while hot swapping.

The Marauder does not Auto-Block any shot that is not directly fired at it, using this principle; the Player can use a combination of Auto-Block Evades when facing Marauders:-

Auto-Block Evade C - Using the "Sticky Bomb" Mod for the Combat Shotgun, the Player can launch Sticky Mortars on the ground between themselves and the Marauder, the trajectory of the Mortar will automatically send it towards the Marauder's ankles. This method does not beat a Marauder in a few cycles and neither is it ammo-efficient, this method is however an excellent way to continuously deal damage to a Marauder and completely ignore it's Auto-Block. The Player may wish to couple in this method if they have opted to go with the traditional Hot Swapping technique.

Marauders are also one of the several playable demons in Doom Eternal's Battlemode.

With a base health of 2000, the playable Marauder serves as a flexible, if fragile, demon that has access to several attacks. Similar to their depiction in the campaign, the playable Marauder wields both an Argent Axe and Super Shotgun and is capable of summoning his trusty Wolf to harass the Slayer. However, he no longer has access to his impenetrable shield to block the Slayer's attacks.

Marauder-Specific End of Round Upgrades 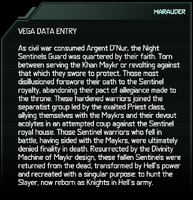 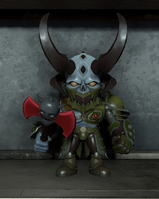 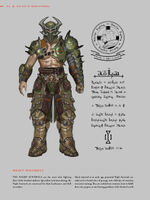 A Marauder confronting the Slayer in the ARC Complex 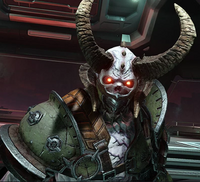