< Mancubus
View source
watch 02:46
The Quarry - The Loop
Do you like this video?
Play Sound
Sub-Pages:

The Mancubus is a Heavy Tank-like demon in Doom Eternal. While serving the same role as in Doom (2016), it has undergone notable design changes to closely resemble its original appearance. Similar to Doom (2016), a stronger variant in the form of the Cyber Mancubus also makes a reappearance.

The Mancubus, hulking behemoth of the demon world, bears notable differences from those of its kind first encountered by the UAC expedition team on Mars. Unlike its brethren which wore a naturally occurring armored carapace, this variation shows clear signs of pre-existing man-made modifications. Armor-plating augmentation to its exterior and a sophisticated arm-mounted weapon system indicate a clear intent to upgrade and weaponize the fighting capacity of the Mancubus, whose heavy stature and resilience make it a formidable threat in battle.

Compared to its appearance in Doom (2016), the Mancubus looks vastly different, more thoroughly resembling its original sprite from Doom II. The Mancubus maintains its overweight stature, massive dual-arm cannons, and squat stance, but has a seemingly stitched together appearance, with signs of stretching and tears all over its body. Notably different from the original design is the heart-like organ in the center of its chest. This appears to be the power source for its attacks.

The Mancubus is a tank, able to dish out absurd amounts of damage and take it too. From a long distance, the Mancubus shoot powerful flame balls from its cannons while slowly moving towards the Slayer. At medium to close ranges, it will use dual flamethrowers to rapidly damage the Slayer. These flame-throwers have a surprisingly long reach, so caution should be exerted until they are disabled. When face-to-face with the player, the Mancubus will fire its cannons directly into the ground, surrounding itself with a puddle of napalm that will deal absurd amounts of damage if the player remains for too long.

Fortunately, the Mancubus' attacks can be largely mitigated by destroying its arm cannons. Destroying the cannons will completely eliminate the Mancubus' flamethrowers and make its fireball attack much weaker. Outside of the weak-point, the Mancubus can be put down with constant fire from your weapons, as its large frame and slow movement speed make hitting it easier than most demons.

Usefully, a Glory Kill or Chainsaw to the chest area of the Mancubus will result in it violently exploding after roughly 3 seconds, dealing massive damage to all nearby enemies, so kill the Mancubus in this fashion to help stem the tide of opposing demons, and grant yourself some breathing room to focus on the next biggest threat.

The Mancubus is also one of the several playable demons in Doom Eternal's Battlemode. With a base health of 3750, the Mancubus serves as a tank, made to take damage and dish it out, with the drawbacks of being the slowest demon in the game and its large frame making it an easy target for the Slayer to hit. The Mancubus also takes reduced damage from the ballista, only taking 250 damage instead of 550.

Mancubus Specific End of Round Upgrades 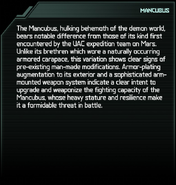