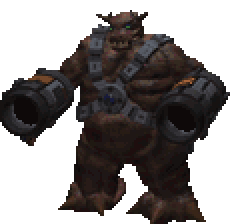 Mancubus appear in Doom 64. Their function in Doom 64 is unchanged to that in Doom II.

The Mancubus of Doom 64 are the resurrected carcasses of those from Doom 1 (PSX or Saturn, since Mancubi don't appear original Doom), resurrected by the Mother Demon. They are made from systematically altered dead carnage remade back into corrupted living tissue. The mutations were devastating. The demons have returned stronger and more vicious than before.

The only good thing about this fat tub of demon is that he's a nice wide target. Good thing, because it takes a lot of hits to puncture him. He pumps out fire balls like nobody's business.

Mutations have greatly altered their apperance. Their pupil-less eyes have blue sclera instead of green, their bodies have less fat and they a more bear-like face. They are taller and wear a metal body harness. Rather than a low growling sound when alerted, they will make a disgusting slobbering sound crescendoing into a low gutteral snarl. Their projectiles are smaller and appear more like fiery cannonballs. Their movement style (body bobbing continually to the sides while walking, with both arms rigidly outstretched in front of its body) is very reminiscent of zombies in real-life vintage undead-themed horror movies.

Despite being resurrected from decaying, dead tissue like other demons, the Doom 64 Mancubus is not quite as much as of a threat as they used to be. Their brimstone fireballs aren't shot in tricky-to-detect patterns to catch the player off guard, but instead each volley is shot straight at the player three times in succession. Their smaller size also makes dodging them simpler. Fighting the Mancubus, like before, is best done with higher grade weapons, from the rocket launcher to the BFG to the souped-up Unmaker.

This type of Mancubus appears on the cover of an issue of Nintendo Power featuring a spread of Doom 64, including a two-page poster that features it in conjunction with other demons.