Doom Wiki
Register
Don't have an account?
Sign In
Advertisement
in: MAP28, MAP30, Levels by name,
and 2 more
English

MAP28: The Spirit World (MAP30 in GBA) is the twenty-eighth map of Doom II. It was designed by Sandy Petersen and uses the music track "Getting Too Tense".

At the start go towards the west opening and follow the hall down towards a large room with some isolated lava (A). In the east wall of the room you will see a small opening, big enough to go through it. Follow the narrow path towards a huge room with spiders (B); incidentally, this is the only level designed by id Software that features more than one Spiderdemon (on Hurt Me Plenty and higher). Go towards the south side and run. Near the yellow door (C), go to the south and climb the stairs to a room with pillars and a chair (D). Walk on the chair and back up to a platform that had lowered. Hit the south switch (E) and get the yellow key behind a door.

Enter the yellow door and grab the red key (H). Immediately return to the large room with the small lava lakes. This time go to the southwest corner of the room and pass the fake wall (I). You will be in small room with a pillar at the center (J). Shoot the west wall and go through the newly open door. Open the red door (K) and exit but watch out for the Arch-viles beside the door (L). 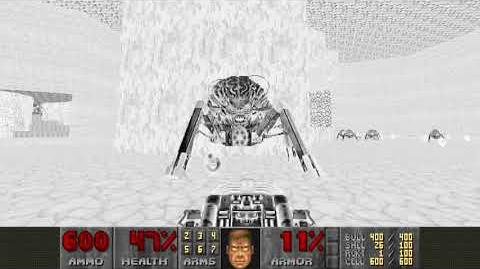 The music track used for this level is based on the song "Am I Evil?" by Diamond Head.