MAP26: The Abandoned Mines (MAP52 in PSX/Saturn, MAP28 in GBA) is the twenty-sixth map of Doom II. It was designed by John Romero and uses the music track "Message For The Archvile".

You start out in what appears to be an abandoned mine. Hit the switch and follow the caged hallway crossing an intersection and turning left at the end (A). After eliminating the Cacodemons flip the switch and go back into a new access at the corner (B). After dispatching the Imps get the red key and go back to the hallways. Return to the intersection, go west and enter the red door (C).

Cross the pool of toxic waste and climb the stairs. Watch out for the Baron who will be in a small raising section (D). Get the blue key and retrace your steps back out the red door. Follow the whole walkway until you arrive in a huge room with a curved walkway above a pool of toxic waste (E). Watch for Cacodemons to raise up from there and follow the walkway to the blue door.

In that outdoor area, make your way around the walkway to a platform with a yellow key (F). Retrace your way back through the huge room and back into the caged walkways. At the intersection go back north and around the corner and enter the yellow door near the switch you hit for the red key (G). Jump in the hole to exit. 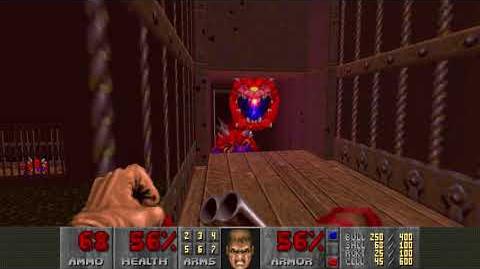 Other Points of Interest

In the automap, the lava pool beyond the red door has a sunken bridge.

Retrieved from "https://doom.fandom.com/wiki/MAP26:_The_Abandoned_Mines_(Doom_II)?oldid=134991"
Community content is available under CC-BY-SA unless otherwise noted.