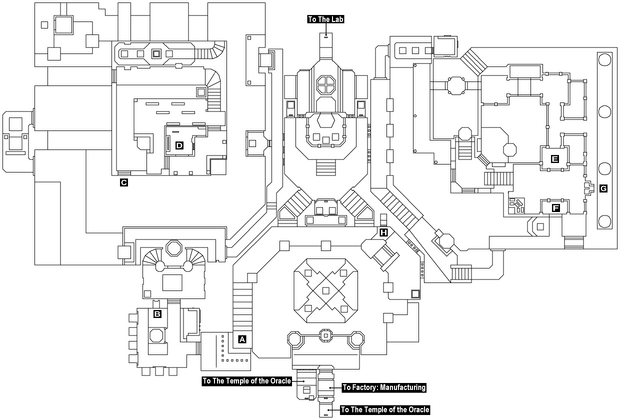 This level occupies the map slot MAP26. For other maps which occupy this slot, see Category:MAP26.

The Proving Grounds are some sort of Order training area.

This is a very complicated and confusing level; I had to work out the most efficient path through it by using backward chaining (what some puzzle-solvers and other logicians sometimes call "synthetic reasoning", although the Wikipedia article of that name claims that to be a metaphysical term rather than a logical one).

As Blackbird has just told you, go down either lift to a courtyard; turn left and go to the lift in the southwest corner (A). Walking off the top opens some bars, go through those and the door behind. Beware of the heavy nasties in this room. Turn right, and go down the lift to a switch (B); operating this removes the obstacle from the nearby stairs. Back up and out through the door you didn't enter by; down either staircase, and at the bottom turn west (left). Down a lift, around and down another lift, and turn right (south), around the building, and through the door (C). Ride the elevator up to a room full of goodies, and exit through either door; go around and through a slide door to a small room with a switch (D). Pressing this opens a teleport elsewhere.

Exit, down the lift in front of you, and retrace your steps to (A); down the lift and across the yard to the other lift in the northwest corner. (You can't just go around the parapet as it's blocked.) Turn right at the top and go through the teleporter. Flip the switch in the middle of this passage, then teleport back to where you were and the bars are now open, allowing you access to another courtyard.

Through where the bars were, down the lift in front of you, turn left and go north, and you will come to three teleports. You need to go through the left (westernmost) and middle ones, in either order.

Go straight ahead and drop down through the hole, then go through the dragon door. Approach the door ahead, and you will find yourself in The Lab. If you are on the "bad" walkthrough path, after returning from The Lab retrace your steps to the entrance teleporter (which isn't difficult, now that most of the doors are open) and return to the Oracle.

There are three exits from the south end of the level: