MAP24: The Chasm (Split into MAP25 and MAP26 in GBA) is the twenty-fourth map of Doom II. It was designed by Sandy Petersen and uses the music track "In The Dark". The map gets its name from the design of the level; a series of deep chasms with thin walkways to move about.

Carefully walk across the winding walkway (A) sprawling in front of you at the beginning of the level. Enter the building at the end (B). Inside, explore the maze-like interior, killing enemies along the way to clear your path. Once you pick up the blue keycard in the northwest corner of the building (C), return to the starting point.

Continue to follow the ledge around to the west, towards the blue door (D). Behind it are a series of extremely thin ledges (E). Walk straight ahead through the intersection and around to the plasma rifle. Upon picking it up, the floor inside the square will rise. After killing the cacodemons there, continue along the narrow ledge back to the first intersection and proceed north, then west to the next intersection. Go north at this intersection and take the first left (west). Walking on this ledge will awaken the cacodemon. Walk around to the central platform (F), picking up the items there. This causes the floor to raise again. Once the floor has risen, head north towards the platform with the hanging corpse dangling above it (G), and you'll be teleported to a new area, where you will be attacked by several lost souls.

Proceed along the path and take a left at the branch. You'll arrive at two teleporters. Take the right (H) one to be transported to a pulsating blue room. In this next room, kill the demons lurking about. Drop down into the center of this room and flip the skull switch to the east (I). This causes a platform in the west to lower, so run over, ride it back up, and flip the second skull switch (J). This one lowers a platform in the north, so once again run onto it before it raises and flip the skull switch (K). This will lower the red keycard directly in front of you (L). Pick it up and exit this area by flipping the switch in the south and walking through the teleporter.

Once you're back in the previous area, walk along the ledge towards the red door. Be careful, as there's no way to escape the slime pit here. Go through the red door and the door directly behind it (M), through the exit door and into the exit teleport (N).

If you time it right when you raise both the middle and the outer platforms, the floor in the middle of the loop where the invulnerability sphere is will go down forever, forming an inescapable pit. The only way to get out is to use the no clip cheat in the PC version. On the other platforms, you can't use the noclip cheat, so you will get stuck, though the lowering floor will eventually cause the game to crash.

Your first exercise in equilibrium.

Massacre in the "control room".

Watch your step here; if you fall, you're done for.
Add a photo to this gallery

There is a possible way of completing this level without the blue key. The way to do so is by going around to the other door that leads into the area on the other side of the wall that contains the door with the blue coded door, go towards the far area that is near the alcove that holds a radiation suit and look for a teleporter that is nearby, enter one of the teleports and be teleported onto the alcove, then you can run and leap onto one of the pathways, but this can be quite challenging since the paths are fairly thin. Now, carefully walk across the path and look for the teleporter with the hanging corpse and then you can be teleported to the area that contains the exit, but you will need to have the red key to exit, regardless.

Furthermore, you can bypass some ledge walking by wallrunning to the red door, as mentioned here. 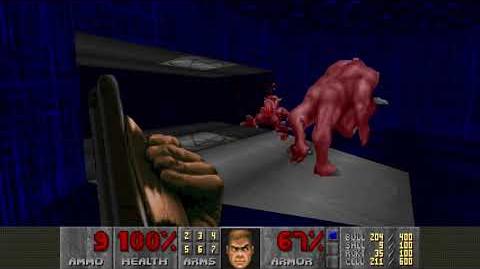 Retrieved from "https://doom.fandom.com/wiki/MAP24:_The_Chasm_(Doom_II)?oldid=134138"
Community content is available under CC-BY-SA unless otherwise noted.