MAP22: The Catacombs (MAP49 in PSX/Saturn, MAP23 in GBA) is the twenty-second map of Doom II. It was designed by American McGee and uses the music track "The Dave D. Taylor Blues".

Right off the bat, secrets #1 and #2 are accessible if you wish to go that route. If not, simply lower the lift in front of you (A) and ride it up to the central area. Kill the Chaingunners on the "compass" platform (B) and drop into the slime pit, killing any Spectres that get in your way. Lower the green lion-faced block in the northwest corner of the pit and ride it up (C). In this next area, flip the switch in the corner and pick up the berserk pack. Continue up the stairs and along the path, killing monsters along the way. When you reach the upside-down "T"-shaped structure (D), go through the door on the south side, kill the Imp, and go through the teleporter.

From here, pick up the blue skull key (E) and run along the walkway back onto the compass platform. Walk along the bridge to the west and pick up the rocket launcher. Drop back into the slime and lower the Baron-faced block in the northeast corner (F). Drop down the shaft, kill the Demons, and raise the bars using the blue key. Walk through the arched tunnel and drop into the next area. Flip the switch to lower a wall, releasing a Baron of Hell. Kill it, and flip the switch to lower the lift to the red key (G). Pick it up (Secret #3 is here) and follow the passage back out to the bars. Go around the arched tunnel this time and flip the switch at the end. Be wary of the Heavy Weapon Dudes that are released upon doing this. Quickly make your way back through the now-open bars before they close again. Lower the green pillar in the corner to get back to the central area. Drop into the slime one last time, and lower the gargoyle-faced block (H). Open the red door, killing more Chaingunners along the way. Flip the switch behind the last door to exit the level.

The Compet-n records for the map are:

The Catacombs contains the following numbers of things per skill level: 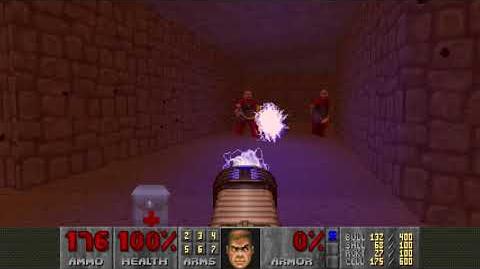