MAP21: Nirvana (MAP48 in PSX/Saturn, MAP22 in GBA) is the twenty-first map of Doom II, named after the Nirvana, the Buddhist Heaven, that ends the whole reincarnation cycle in Earth. It was designed by Sandy Petersen and uses the music track "Countdown to Death". Coincidentally or not, Kurt Cobain, the leader of popular rock band Nirvana, died by committing suicide with a shotgun blast the same year Doom II was released - whether it is somehow related to this fact or is a simple coincidence, there is a super shotgun right at the starting room of the map.

Pick up the health bonuses and medikits in the starting area (A) and kill the Imps in front of you. Take the teleporter on the right (the eastern one). On the other side, continue along the path either way, killing Spectres and Shotgun Guys along the way. Once you approach the teleporter at the end, the wall will open, releasing two pairs of Revenants. Flip the switch to lower the wall, then step through the second teleporter (B).

In the next area, flip all four switches on the triangular platform (C). This raises a staircase in front of you. The nearest step actually acts as a lift, so lower it and step on. Once it has risen again, you can jump onto the triangular platform (D) to retrieve the rocket launcher. Afterwards, climb the stairs and continue down towards a horde of Imps and Mancubi as well as two teleporters. Take the southern one (to your right).

In the next area, press the use key on any of the four walls to lower them, unleashing an ambush of Imps around you. Crossing into their territory causes the next four walls to lower, revealing further two Pain Elementals. After all the enemies are dead, pick up the yellow skull key (E) and go through the teleporter. Flip the other switch to open a shortcut back to the starting area. This time take the teleporter on the left (F, the western one).

Open the yellow walls in the next area (it may be tempting to fire rockets between the yellow walls before lowering them, but be careful, as there is a high probability of hitting the walls). From here, follow the ledge around to the end, then drop down onto the Imps' platform and flip the switch. This lowers the Chaingunners' platform across the way, where you can pick up the red key (G). Grab the nearby radiation suit and head back out into the main slime pit with the brown platforms. The blue key rests on the northwestern-most platform (H). Lower the platform just southeast of this as you would a lift, ride it up and drop onto the blue key platform. Once you've obtained all 3 keys, head back to the southeast corner of the pit and lower the platform there (I). Ride it back up to the ledge, make your way through the red and blue barriers, then exit.

You do not need the blue key to finish this level, as there is enough space to fit through the gap between the blue doors. Because this feature of the map is very obvious, it was likely made intentionally for some reason.

You can also bars-glide through the space between the wall and the yellow door (since it (the space) is wide enough to perform such trick), bypassing any use of the yellow key. 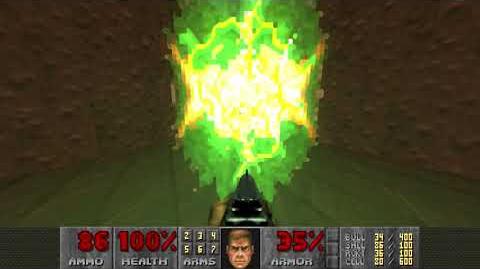