Doom Wiki
Register
Don't have an account?
Sign In
Advertisement
in: MAP20, MAP21, Levels by name,
and 2 more
English

MAP20: Gotcha! (MAP21 in GBA) is the twentieth map of Doom II. It was designed by John Romero and uses the music track "Message for the Arch-vile". It is notable for including a possibility of monster infighting between a Cyberdemon and a Spider Mastermind.

Go through the door at the start and clear the opposition there. While moving into a larger room, platforms will lower in the center of it revealing the Spider Mastermind and Cyberdemon (A). Try to lure them into a fight (moving in the west of the room behind a raised wall in the western platform). Defeat the remaining enemy (usually the Cyberdemon) using the platform as cover (B).

Hit the switch in the western platform and immediately eliminate the Arch-vile and Baron of Hell that will come through the door (C). Afterwards, take the lift to go around the walkway and go through the door. Follow a winding stairway (D) down towards the teleporter. Go down another stairway and jump into the dark opening (E). Follow the corridor to the end and hop in the teleporter (F).

You will slowly go down into a small room with zombies and Imps (G). Through the opening you will see a section of wall lowering across the lava pool (H). Wait for it to lower completely and jump through the opening. Follow the corridor, climb up the stairs and snatch the plasma rifle (I). Watch out for enemies popping out and run down the stairs towards the walkway and walk through the teleporter (J). In the last room, walking through the narrow walkway until the end and jump in the hole (K). Watch out for Heavy Weapon Dudes and Cacodemons.

You are at the corrupt heart of the city, surrounded by the corpses of your enemies. You see no way to destroy the creatures' entryway through this side, so you clench your teeth and plunge through it.

There must be a way to close it on the other side. What do you care if you've got to go through Hell to get to it? 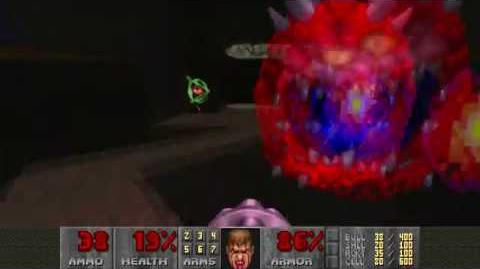