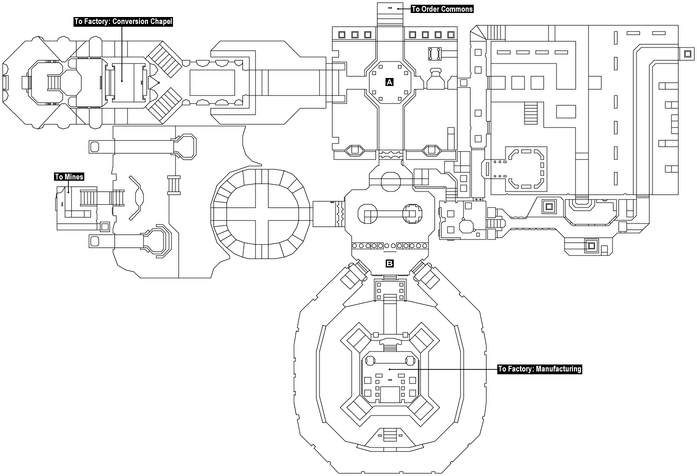 This level occupies the map slot MAP20. For other maps which occupy this slot, see Category:MAP20.

Factory: Receiving is the front (goods inwards) department of the Factory.

Part 3: To the Conversion Chapel

If you entered from the Commons, just go straight ahead and you will soon reach a crossroads (A). If you entered from the Mines, go ahead (down either of two curving staircases) until you reach a room with a barred-off section to the south (your right), then turn north (your left) and through the door to the crossroads. Turn west (left from the Mines, right from the Commons) and go down the path (it's marked with the same symbol as the entrance to the Oracle's Temple).

Go down either staircase, around and through all the doors. You are now in the Conversion Chapel.

Mission G11: Onward to the Lab

If you entered directly from the Commons, just go straight ahead and through the bars that have opened to a set of three doors (B). If you entered via the Mines, instead of turning left for the crossroads, turn right for these doors. If you entered via the Catacombs (not recommended), at the crossroads turn left as if to enter the Commons, but just before (or just after) you do, turn back and go straight ahead; or head toward the Mines until you hear those bars open, then head back to and through them.

As you will have noticed from the map, there's a large area to the east. This is absolutely crawling with Crusaders and other nasties, and is just an extremely roundabout and dangerous way of getting to the room with the bars (which won't open if you take this route, anyway). Avoid.