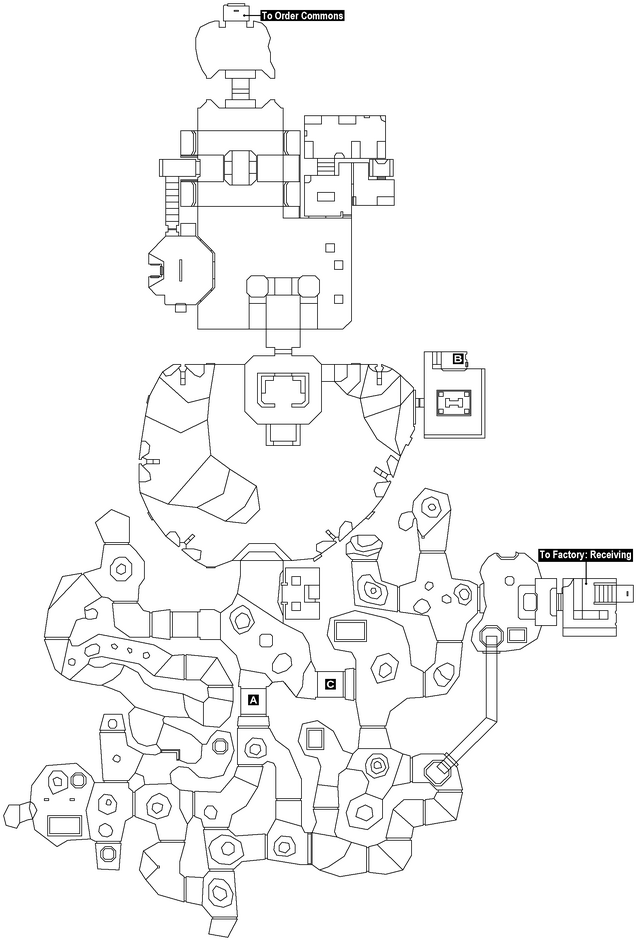 This level occupies the map slot MAP14. For other maps which occupy this slot, see Category:MAP14.

The Mines of Degnin are to the south of the Order Commons.

Be careful in here; there are all sorts of nasties, including partially-invisible versions of all of them. Remember that you're not supposed to be killing the miners, and that the Degnin Ore will explode if shot (setting off any nearby ore). It's probably best to use the Punch Dagger in the mine tunnels themselves, as by now you should have 170 stamina and thus be strong enough to kill almost anything in three blows or less; or use a long-distance but aimable weapon (such as the Assault Rifle, but not the Grenade Launcher or the Sigil) and be careful with your aim.

Enter the main mine cavern, skirting the guard post, and flip the switch by the side of the lift to open the tunnels. Ride down and take the lift straight ahead (A); grab the ore, then go back to the guard post and to the nearby door shielded by a forcefield. Drop a lump of ore by the forcefield (either "drop" or "use" will work), then back off to a respectful distance and shoot the ore with any long-range weapon. Go in and upstairs, press the switch in front of you (B), and shoot the transmitter thereby revealed. Turn around and press the other switch; it removes the forcefields in this level, including the one guarding the exit to the Factory. Now leave.

Part 3: To the Conversion Chapel

Blackbird suggests exiting the Mines and using the Factory entrance in the Commons, but this is not a good idea as you need to destroy the forcefield first, and doing this will have every guard in the Commons after you. Instead, go back into the tunnels and down the lift to the left (C), then straight ahead, left, right and up the lift. Through the door (or open archway) is the Factory.