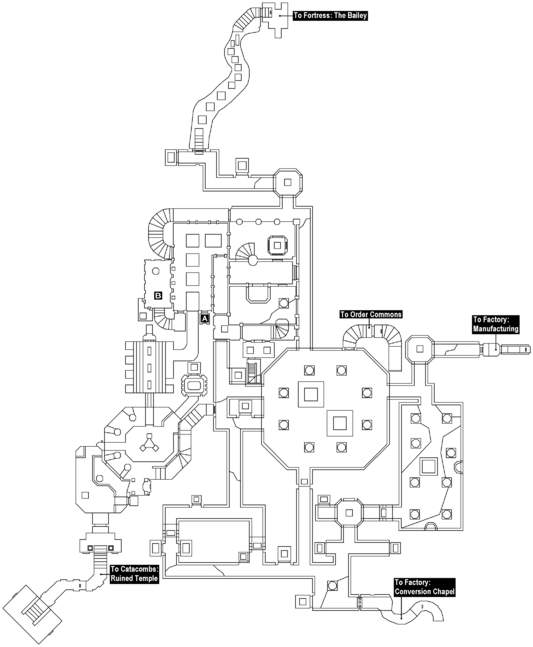 This level occupies the map slot MAP13. For other maps which occupy this slot, see Category:MAP13.

The Catacombs is a maze of passages and halls (many of the halls are hypostyle) under The Order's stronghold.

Part 1: Get the keys

Turn right, then right again, and continue to the end where you turn left; straight ahead, down the stairs, and to the southeast corner to flip a switch (A). Go back up the way you entered (be careful, there's another staircase which leads nowhere) and drop into the room on your right at the first opportunity. Go right, and across the slime-covered blocks and around to a room with low arches. Go through the southern one (on your left) and straight across the next room (dodging around the obstacle in the middle). Flip the switch, then drop into the room opposite the switch. Go south, and around, and you will end up in the Ruined Temple.

You can no longer retrace your steps all the way because of the lowered water level, so a teleporter has been revealed instead. This will take you to the otherwise dead-end room you may have entered by mistake before (B). Go back to the Commons, and from there to the Mines (at the south end of the map, virtually opposite the Catacombs).