Doom Wiki
Register
Don't have an account?
Sign In
Advertisement
in: MAP11, MAP41, Levels by name,
and 2 more
English

MAP11: Circle of Death (MAP41 in PSX/Saturn) (named "'O' of Destruction!" on the automap) is the eleventh map of Doom II. It was designed by John Romero and uses the music track "The Healer Stalks". The automap name is a reference to the Hoe of Destruction in the Ultima series of games, of which Romero is a fan src. This map also introduces another new enemy, the Arch-vile.

Proceed along the walkway (A) to your right and take a right across the bridge into a rusty metal area. Climb the stairs and take out the Arachnotrons and Cacodemons that attack. Proceed up either staircase into the structure ahead of you. Once you pass through the doorway inside the structure, the first Arch-vile of the game is released (B). Take cover behind either side of the door if needed. Once it's been killed, re-enter the room and pick up the blue keycard (C). Now return to the main area of the level.

Make your way along the walkway to the opposite end of the area and go through the blue door (D). Flip the switch to raise a ledge just outside (E). Continue through this room, up the small staircase, and along the newly risen ledge. Flip the satyr-faced switch and return to the main area once again. Continue along the walkway to the left about halfway, and across the newly created bridge to the red keycard (F).

Drop down into the slime to the northwest of the central circular walkway and head through the red door (G). Proceed through the hallway, towards the iron bars (which will automatically open), and up the stairs, arriving at a wooden skull switch. Flip it to lower a platform just outside. From the new platform, drop onto the cement walkway and continue along it, eventually dropping into a dark cave (H). Dispose of the flying enemies here and head through the brightly lit tunnel in the structure ahead. You should now be in a "E"-shaped watery room (I). Ride the lift in the upper prong of the "E" up to a switch. Press it, ride the lift back down, and run into the timed lift that just lowered in the lower prong of the "E". Press the switch there to open the gate to the exit switch (J). The teleport near the exit switch will take you back to the main area (on a ledge with an otherwise unreachable soul sphere, if you need it).

You have won! Your victory has enabled humankind to evacuate Earth and escape the nightmare. Now you are the only human left on the face of the planet. Cannibal mutations, carnivorous aliens, and evil spirits are your only neighbors. You sit back and wait for death, content that you have saved your species.

But then, Earth Control beams down a message from space: "Sensors have located the source of the alien invasion. If you go there, you may be able to block their entry. The alien base is in the heart of your own home city, not far from the starport." Slowly and painfully you get up and return to the fray.

Because of a peculiarity of the Doom engine that allows the player to press a switch no matter how far above or below it they are, it is possible to skip a large amount of this map; the player can press the wooden skill switch mentioned in the final paragraph of the walkthrough from the nukage outside the red door, by hugging the ledge it sits on. Then the player can jump onto the cement walkway leading to the exit area from the main "O". It's also possible to jump from the Imp's platform to take the red keycard, so it can be accessed without picking up the the blue key. 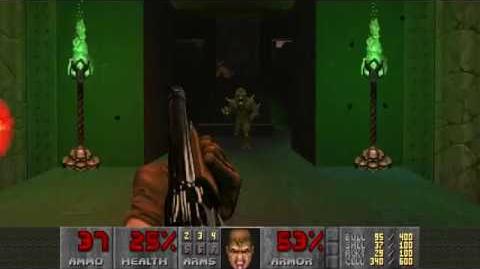