Doom Wiki
Register
Don't have an account?
Sign In
Advertisement
in: MAP10, MAP40, Levels by name,
and 3 more
English

MAP10: Refueling Base (MAP40 in PSX/Saturn) is the tenth map of Doom II. It was originally started as a Doom map by Tom Hall (and did appear as E1M6 of Doom 0.5), but did not make it into the game and was instead completed by Sandy Petersen for Doom II. It uses the music track "The Demon's Dead". This map is notorious for having a massive monster count, which is especially high on Ultra-Violence and harder difficulties, nearing 300 monsters.

Right at the start of the level, open the blue-triangled wall ahead and to the right (A). Inside is a shotgun and some ammo. Continue down the stairs and relatively straight through the opening in the stone wall. You can lower the vine-covered column here to reveal a chaingun and stimpacks as well as a few Spectres. Continue through this room and out the opening leading outside. Go through the tan door to the left. The next room is dark and contains several silver alcoves and holds dozens of zombies (B) (utilizing monster infighting and weapons with splash damage will help you survive this room). One of the alcoves in the southeastern end of this room contains a yellow key (C). Pick it up and return outside.

Make your way to the opposite end of the long outdoor area and open the door there. The next room is very large and dark, and is home to several Imps, Revenants, and Arachnotrons. Go through either of the tunnels at the north end of this room and you'll reach a stairway leading into a brightly lit alcove in the wall. Climb the stairs and the wall in front of you will open, revealing a blue keycard (D). Pick it up and return outside once more. If the wall containing the blue key closes, you can open it manually.

Once back outside, enter the round central room via the passage in the wall at about the midpoint of the outdoor area (E). Continue through the door to the south into another dark room. Clear the area of enemies, then head through the yellow door in the southwest corner (F). Proceed through another short room and through the blue door (G). Continue through one last hallway, through the exit door, and flip the end switch. In the last two rooms be aware of the Cyberdemon on the other side of a barred window (H). 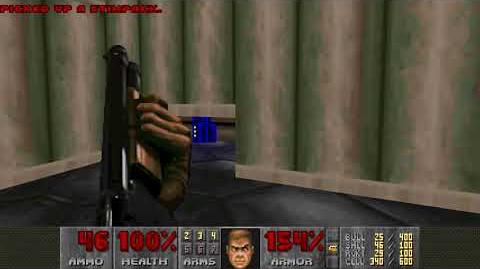