Doom Wiki
Register
Don't have an account?
Sign In
Advertisement
in: MAP08, MAP38, Levels by name,
and 2 more

MAP08: Tricks and Traps (MAP38 in PSX/Saturn) is the eighth map of Doom II. It was designed by Sandy Petersen and uses the music track "The Dave D. Taylor Blues". This map introduces a new enemy, the Pain Elemental, who looks very similar to the Cacodemon. The Cyberdemon makes his first return here.

This level starts in an octagonal room with 8 doors, each on the respecitve cardinal and colateral directions of the room. First, go through the south door and you'll be in a room with many Barons of Hell and a Cyberdemon (A). Once the Cyberdemon sees you, he'll start firing, hitting the Barons (who at first don't see you until you decide to attack), who will fight back. While they're fighting, pick up the soul sphere here (B). If all the Barons between you and the Cyberdemon have been killed, move in front of another batch so the rockets hit them instead of you, and the fighting should continue until the Cyberdemon is killed. Once the Cyberdemon is dead or there are too few Barons left to kill him, pick up the invulnerability sphere nearby and kill the remaining enemies. Once the coast is clear, drop down to where the Cyberdemon originally was and pick up the yellow skull key (C), flipping the switch behind it in order to get back to the starting area (D). Be careful upon re-entering the center room, as some Barons may have accidentally teleported from the previous room.

Back in the center room, open the yellow (northwest) door and follow the path along until you reach the red skull key (E). The floor behind you will have sunk into a pit of sludge, keeping you from returning to the starting room. Arm yourself with your most powerful weapon and back into the alcove where the red skull key lies and pick it up. Once you do, the walls start lowering, unleashing a slew of enemies (F). Clear a path to the northeast corner of this room and pick up another invulnerability sphere. Clear out the rest of the enemies and flip the switch in the northwest corner of the room to raise the bridge to the center room again (G).

At this point you can exit, although much of the level remains unexplored (and is completely optional). Check the secrets section below for descriptions of the optional areas. Once you're ready to exit, open the red (west) door in the center room (H). You may want to save here, as the next obstacle is easy to mess up, resulting in inescapable death. In order to reach the exit door, you must run across the platforms floating in the sludge. Once you step on one (I), however, it begins sinking, so speed is essential. Once you've successfully reached the other side, open the exit door, kill the Demon, and flip the switch.

The two "secrets" mentioned below exist mostly for compatibility in multiplayer. 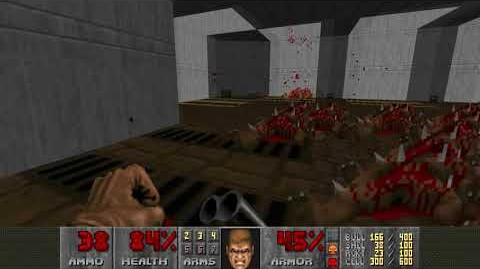 The music in this level is inspired by "Hold Your Head Up" by Argent.