Doom Wiki
Register
Don't have an account?
Sign In
Advertisement
in: MAP07, MAP37, Levels by name,
and 3 more

MAP07: Dead Simple (MAP37 in PSX/Saturn) is the seventh map of Doom II. It was designed by American McGee and Sandy Petersen, uses the music track "Shawn's Got the Shotgun" and introduces two new enemies, the Mancubus and the Arachnotron.

Press the switch to lower the walls. Kill 2, 4 or 7 Mancubi you see and more walls will lower, revealing 4, 8 or 12 Arachnotrons (A). Kill them all and you will be able to end the level by pressing the eye switch in the middle of the map (B). Use the blur spheres to avoid the monsters.

Before you exit, hit the switches in this room and the platforms the Mancubi were on will lower, revealing health and weapons. Also, get the ammo and health items in the areas where the Arachnotrons came from. Now go back to the center of the map and exit. 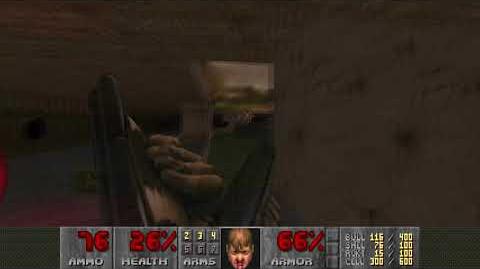