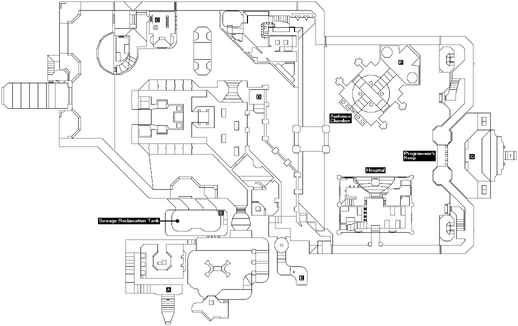 This level occupies the map slot MAP07. For other maps which occupy this slot, see Category:MAP07.

The Castle is the Order's headquarters in Strife. After you accomplish Macil's first few missions (freeing prisoners, destroying power crystal, and opening castle gate in sewers), the player along with a lot of Front troops attack the castle which is defended by Stalkers, Sentinels, Acolytes, Crusaders, and a couple of Reavers in buildings, plus some turrets.

If you attack Macil after taking over the Castle, the rebel troopers will help you, although Macil is invulnerable to their attacks.

You start at the far southwest of the map (A). Go around and outside, enter the door at the end; if you speak to the person in there, he will tell you to flip the switch to open the way to the Sewage Reclamation Tank, but I've just told you that so there's no need to ask him. Go there and turn the valve (B), then quickly walk into the falling sewage (backing into it is probably quickest) and when it's at its lowest, enter either of the portals to return to the Sewers. Don't forget to don an Environmental Suit.

Enter the huge door in front of you to be greeted by the sounds of a massive gunfight. Don't shoot the tan soldiers without shields; those are your allies. (If one appears to be shooting at you, he's probably shooting past you.) Follow the wall to the left, enter the door and the next one at the top of the stairs (C). There you will meet the first of the False Programmers; talk to him and he will spin you a tale about the Programmer being a fiction spread by The Order.

Go back out and hook around the building; go under an arch and then around the corner of the building to your right, to a ground-level entrance (D). Go in and there is the long hallway; go down this and up the stairs to your right to the Training Facility (E) (optional, but recommended as this gives you a stats boost (and necessary if you are to get the "Fully Amphed" and "Top of the class" achievements); it also has an Armory, so you can refill for free both before and after doing the course).

Return down the corridor and out. Cross the bridge to your right, then enter the Audience Chamber to your left (F). On exit, across the yard is the Hospital, if you need to restock your medical supplies; you could also go back to the Training Facility, to loot the Armory (this is your last chance to do this); otherwise, head to either of the doors in the eastern battlements (left from the Audience Chamber, right from the Hospital) and to the middle; press either button to lower the walkway and allow access to the Programmer's Keep (G). Go in there.