Doom Wiki
Register
Don't have an account?
Sign In
Advertisement
in: MAP06, MAP36, Articles with unsourced statements,
and 3 more

MAP06: The Crusher (MAP36 in PSX/Saturn) is the sixth map of Doom II. It was designed by American McGee and uses the music track "In the Dark". The monster Revenant debuts in this map; also, if the game is played on skill level 3 or lower, the Hell Knight - who only debuts in the previous map if the game is played on skill levels 4 and 5 - will also be introduced; in such difficulty levels, the Spiderdemon also returns from the original Doom. The map is named for the giant crusher in the large room near the starting area.

From the starting position, work your way straight forward through the forest of pillars to the lift on the far side (A), fighting enemies along the way. The lift will lower to a large room with a blue keycard (note: the keycard appears in different locations, depending on your skill level. When you get blue keycard, you can return back to the starting room). Once at the bottom of the lift, flip the switch to crush whatever enemy is under the huge crusher to make things easier for yourself. Once the monster (B) is dead, you can pick up the plasma rifle and, on ITYTD and HNTR, also a blue keycard under the crusher. Now ride the lift you came from back to the top. This time, run through the opening in the bars in front of you and you'll land on a small platform with a switch on it (and, on HMP, a blue keycard). Flip this switch to lower a lift at the far end of this room with a blue keycard on it (C) (on UV and NM). Run over, and ride the lift up. Follow the hallway around to a soul sphere (D). Drop down and ride the lift back up to the starting room. You can enter secret #2 before you return if you wish. Be careful in the starting room, as a closet has opened releasing many enemies that may be lurking among the pillars. Open the blue door at the north end of the room and flip the switch to lower the lift (E). The lowered lift exposes a small hidden room with some armor bonuses you can pick up if you wish. Ride this lift up, and follow the hallway past the red door to the end. Open the door here, flip the switch to lower the floor, and continue through a second door. In the next room, continue up the stairs, fighting the enemies released by the opening walls as you ascend. As you near the top of the spiral staircase, be cautious not to fall into the lava as it is inescapable. At the top of the stairs, hop onto the next platform and grab the red keycard (F). Before returning to the red door, you may want to enter secret #3. On your way back to the red door, beware of some recently released Imps. Once outside, continue along the path under the Stonehenge-like structures to the next door (G). Again, the lava here is inescapable, so be careful. Once through the last door you'll arrive in a large, dark, square room (H). Before you do anything else you may want to kill the Spectres in the slime moat to keep from getting in your way later on. Make your way to the opposite corner of this room and flip the switch next to the yellow keycard (I) to lower it. When you pick it up, the central structure in the room opens, causing several enemies to teleport in from all directions. Once they're dealt with, enter any of the teleporters along the perimeter of the room to be taken to the inside of the central structure. Flip the switch to raise a bridge to the yellow door on the west side of the large room (J). Open it and kill the Demon to exit.

You have entered deeply into the infested starport. But something is wrong. The monsters have brought their own reality with them, and the starport's technology is being subverted by their presence.

Ahead, you see an outpost of Hell, a fortified zone. If you can get past it, you can penetrate into the haunted heart of the starbase and find the controlling switch which holds Earth's population hostage. 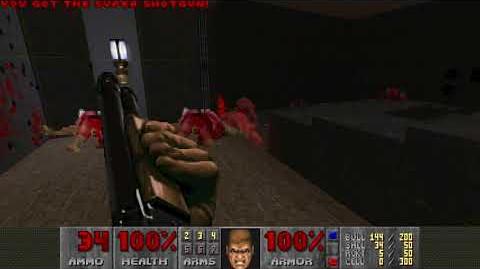 The music for "In the Dark" is inspired by the track "Unchain the Night" by Dokken.