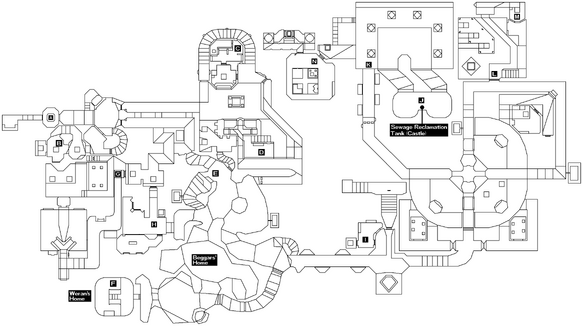 This level occupies the map slot MAP06. For other maps which occupy this slot, see Category:MAP06.

Tarnhill Sewers is home to many of Tarnhill's beggars, and provides a lightly-guarded way into the Castle.

You start at the far west of the map (A). Blackbird will tell you that you are looking for Weran. Take the first left and ride the lift down. Up the stairs, kill the guards, take the ID Card from the red-uniformed one, and press the button (B); there's some ammo and Environmental Suits here if you need them. Go back down and enter the left (north) corridor, donning one of your Suits just before doing so. Up the stairs, enter the Storage room (C), cross it and open the bars using the switch; go through and nab the Grenade Launcher. Don't forget to grab anything else you need (including the HE Grenades).

Through the door opposite Storage; at the portal in the corridor turn right, kill the guard, cross to the platform he was on (D), and press the button. Then go back up and to the very end of the corridor; go right, then left, and you will find yourself at a stairway which needs to be climbed by a combination of walking and jumping (E). At the top, go across to the red-floored room, then across again, and right to where Weran lives (F). Go in and talk to him (and swipe his gold ;-).

Across, left, across, and down the stairway to (E). Left, left again, and carry on to two doors; take the one on your right (G). Left at the top of the lift, around (plenty of sentinels here) and press the button. Carry on round (press another button) and across the newly-raised walkway. Right, left, left, and you are back in Town in a new area. Kill the guard and take his uniform, then press the button to open the door.

To get back to Weran you can either go via the Overflow Gate again (at the two corridors take the right one, first right and up the slime staircase, the short flight of steps you descended on the way to (G) is on your left), or retrace your steps to (G) (this is probably the easier route) and enter the other door (H). Go in to the guard post in front of you (he will drop another ID Card, which you can pick up, but you already have one and don't need another) and press the switch. Through the door and around; you will find yourself back at the beggars' home.

Talk to Weran and give him the uniform; he will give you the parts of a flamethrower, and open several tunnels. Go straight across from his home to one of the new tunnels. At the bottom of the stairs, across to another staircase which wasn't open before, and through a gauntlet of sentinels to a guard post (I). (The door opposite the one you entered has a teleporter to (H) if you need anything from there; this teleporter is two-way.) Press the switch to open the big door, then exit to the Castle.

You start this part in the Sewage Reclamation Tank (J). Head north through either opening, then south through the other southern exit from this room (K). Follow the corridor around to a door (L) (shortly before the door is a supply stash if you're short of anything); open it and follow the walkway to a valve. Turn this then retrace your steps to (K). Turn left and cross to the door, then enter (N). Press the button, and jump up into the passage; follow it around to a switch, press this to reveal the Gate Mechanism, stand back and destroy it with your weapon of choice. (One HE grenade round should do it.) Then cross the place where it was and go down the corridor (K) again (the first part is now another sentinel gauntlet; the end of which is blocked by bars, but fortunately there's an obvious switch) until you get back to (I); use the teleporter to (H), then exit to Town as above.