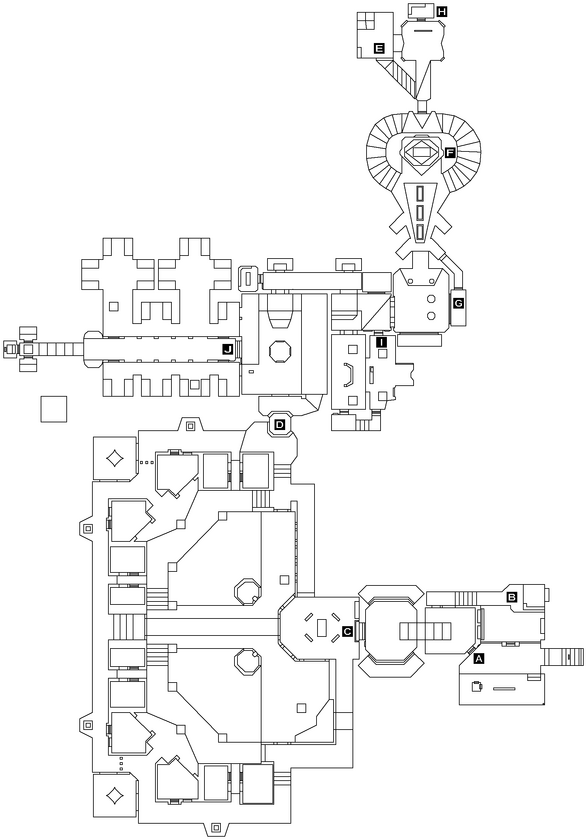 This level occupies the map slot MAP05. For other maps which occupy this slot, see Category:MAP05.

Norwall Prison is the prison in Tarnhill. The first mission that Macil sends you on for The Front mostly takes place in here.

You now have the prison pass. Enter, go straight ahead, talk to the guard (A) and show him your pass. Then go through the arch on your right and up the stairs (B); if you talk to Warden Montag he sounds the alarm, but this makes no difference as the alarm will sound shortly anyway. Kill him. Take the key, the assault rifle and the targeter.

Now go back and take the other stairway (C). If you killed Montag without talking to him, this is when the alarm will be raised. Unlock the door (the keyhole is on the left, you can hardly miss it) and walk through the corridors (in the southwest and northwest corners you will find alcoves with switches in them to open the nearby bars so you can continue), shooting guards and hatspiders on the way. Don't forget to pick up any supplies you find! (Look into the niches you pass.) Finally, in the northeast of the corridors, you will reach an elevator (D); ride it to the lower floor, go down the stairs and around, then through the arch (you might want first to go to the cell block, (J), and clean out the spiders before continuing, so as to not accidentally kill any prisoners later). The door on your left has some supplies if you need them. To the other end, right and then left past Main Control, left again to a passage with an altar (F) and a pair of staircases at the end. Go up either one; at the top is a Sigil door. Go through this and up the stairs to Judge Wolenick's bedroom (E). Again, talking to him is optional; kill him and take his severed hand, then return to Main Control (I) and use the hand to open the door. Once inside, use the hand to activate every hand scanner. Exit through the door opposite the one you came in (one final hand scanner to operate), then up the stairs and back down the corridor. Enter the cell block (J) (watch out for spiders; it's difficult in here to get a clear shot at one without risking killing a freed prisoner) and go to the end and through the teleporter back to Base.