Doom Wiki
Register
Don't have an account?
Sign In
Advertisement
in: MAP04, MAP34, Levels by name,
and 2 more

MAP04: The Focus (MAP34 in PSX/Saturn) is the fourth map of Doom II. It was designed by American McGee and uses the music track "Between Levels". The par time is 2:00.

Go through the door in front of you at the start of the level. In the next hall, go straight up the short staircase and flip the switch in the room at the top. This lowers the blue keycard later in the level (A). Return to the hallway and head to the other end (B) and through the door. To the left is a locked blue door, so continue right along the path until you reach the blue keycard. After you've retrieved it, head back the way you came. On your way back, you will be ambushed by a group of Imps from a newly opened closet (C). Head back to the blue door by continuing to follow the path or by going through secret #2.

On the other side of the blue door, flip the light switch next to the door if you like. Make your way to the end of the hall and through the next door. In the next room, stand on the small box in the corner near the door to cause a crate in the middle of the room to lower. Ride it back up to get the red keycard (D). Go through secret #3 for a shortcut back to the red door near the beginning of the level.

Pass through the two red doors (E) and walk along the walkway to get the yellow keycard (F). Be prepared, as you will be ambushed by several Chaingunners when you pick it up. Drop down to the left side of the walkway you are on and follow the tunnel to a teleporter (G), and go through. When you reach the other side, flip the switch on the wall to raise the exit walkway (H). Go through the teleporter to your left to be teleported back onto the raised walkway. Go through the now-accessible yellow door to the exit switch.

With some skills, it is possible to reach the exit without raising the walkway that leads to the exit chamber. To do so, you can strafe jump from the left platform to the center platform. This may take a few tries to accomplish. Another trick, you can straferun from the incomplete bridge to the northwest, then southwest to the yellow key bypassing the traps, then to the switch and then northwest. This way you can easily get to the exit. 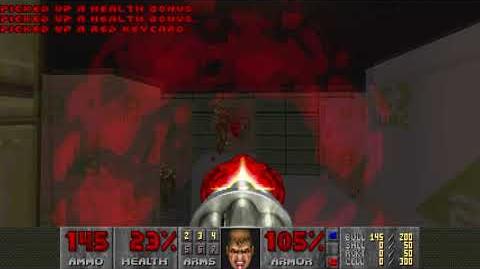