Doom Wiki
Register
Don't have an account?
Sign In
Advertisement
in: MAP03, MAP33, Levels by name,
and 2 more

MAP03: The Gantlet (MAP33 in PSX/Saturn) (also called The Gauntlet) is the third map of Doom II. It was designed by American McGee and uses the music track "Countdown to Death". The par time is 2:00. The new enemy Chaingunner, the third and strongest type of Hell-possessed human soldier, debuts in this map, only if played on skill 3, 4, or 5.

Enter the door straight ahead of you at the start of the level (A). Go down the stairs and through the doorway at the bottom, then ascend another set of stairs (B). Follow the path left, along past the lift to the end. There is a small river of water crossing the path - follow it left to get a combat armor. Return to the lift you passed earlier and ride it up.

In the next area, go straight down some stairs (C), across the water, back up another set (D), and down some more into the structure, where a chaingun lies. Continue going forward, up yet another set of stairs, to get the blue key (E). Enter the blue door on the left and follow the corridor to its end, where a switch is found. Press the switch, which causes a bridge to rise in the water area, and exit through the blue door next to it (F). Go right, going down and then up the stairs again. On the far side, turn around and walk on the ledge to reach the bridge that rose. Cross it and go through the teleport (G).

In the next area, go through the door, then drop into the grassy pit (H). Pick up the red keycard in the center (I). There are two switches on the west end of this pit. The left switch opens a room on the far end of the pit that contains some armor bonuses, but also releases several monsters (J). The right switch lowers a lift to the left that takes you up to the red door (K). Go through the red door to reach the exit switch.

View of Secret #1 from the outside

View of Secret #1 from the inside

View from the pilier the player is teleported to when exiting Secret #1. 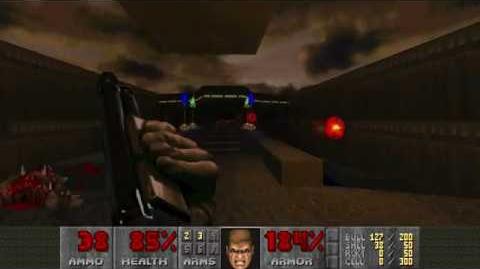