MAP02: Underhalls (MAP32 in PSX/Saturn) is the second map of Doom II. It was designed by American McGee and uses the music track "The Healer Stalks". The par time is 1:30.

There are several traps and monster-only teleporters that can roll in shotgunners and other enemies, and getting the red key opens up imps and demons.

Near the middle of the east water river, is an alcove taking you to a door. Open it into a computer room with lots of zombiemen and shotgun guys to kill. On the other side is a super shotgun.

You can use a bar glide. In order to do so, get to the location of the water that you can see the brick building with the red key. Then run facing west. You will be behind the barricade opened by a switch behind the red door. However, you will be confined to the western portion of this map. Also it may take several tries. 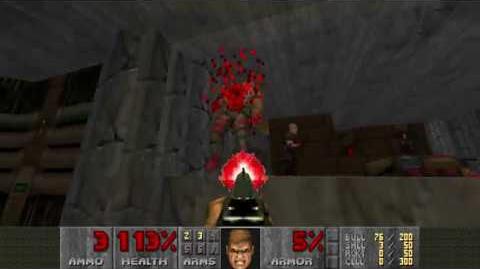 The music for this level is inspired by "Samba Briza" by Atheist.

A Shotgun Guy next to an explosive barrel appears to be stuck and can't move, only walk in place.

Retrieved from "https://doom.fandom.com/wiki/MAP02:_Underhalls_(Doom_II)?oldid=127896"
Community content is available under CC-BY-SA unless otherwise noted.