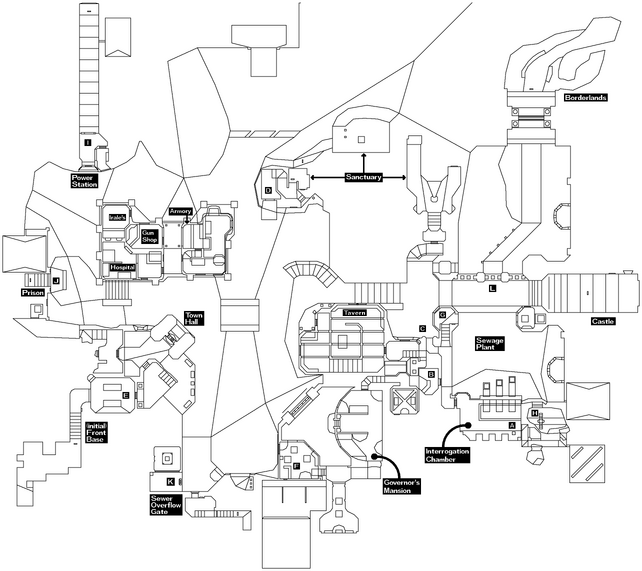 This level occupies the map slot MAP02. For other maps which occupy this slot, see Category:MAP02.Template:Strife 1-10
Note that for the sake of size and hence usability, some purely cosmetic parts of the top of the map (mostly the Warehouse Docks) have been omitted, since those parts cannot be reached anyway.

The Town of Tarnhill is the area in Strife where the game begins.

Always remember that this game is not a slaughter-fest like the other Doom-engine games; it has a plot which is relevant, and isn't just an excuse to kill everything and everyone you see. Indeed, adopting that approach will rapidly make the game unwinnable, due to your killing off important NPCs and thus preventing them sending you on missions, or to your incautiously breaching stealth with noisy weapons (there are only two stealth weapons available) and thus setting off alarms, causing waves of guards to teleport in and overwhelm you. Besides, at least half the people you meet will be innocent townsfolk whom you are trying to liberate, not to murder. Kill only when necessary (you will probably know when; for example, if the alarms are already going off and the guards attacking).

It is probably a good idea to switch to the Punch Dagger when not actually fighting, so that an accidental press of the Fire key or button doesn't waste ammo or break stealth.

You begin this area being interrogated by Acolytes (A). You must punch your way out. Remember to collect the goodies in this room (including the ammo clips hidden behind the columns by the exit) first.

Exit and then go into the first door you see (B). You will meet up with Rowan, who gives you a task. He wants you to go to the Sanctuary to kill Beldin who is about to reveal the location of The Front. On leaving Rowan's room (again, don't forget to collect the goodies), continue to the end of the passage and go through the opening to your left (C). Ahead is the Sanctuary (upper entrance), but you can't enter that way as it's locked. So go down the stairs to your left, then the flight in front of you, and turn right; straight ahead is the official (middle) entrance to the Sanctuary, but it's guarded so you can't get in that way either. Head towards it but drop into the river; there you will find the short pier Rowan mentioned. Go in to the Sanctuary that way. The rest of this part of the walkthrough is on that page.

After killing Beldin, bring his ring back as proof and Rowan tells you about The Front and gives you the com link and the base key. Now go to the ruined Town Hall; as Blackbird says, take the left door followed by the right one, and you will meet Geoff (E). Tell him the code Blackbird just told you (if you can't hear her, it's the first choice in the conversation dialog) and Geoff will open the door. (If for some reason Geoff is dead or AWOL, go to the right-hand corner at the back of the room and open it; this gives you a button to open the door yourself). Enter the Front Base and talk to Macil. While you're there, you could go collect some of the hidden goodies.

If you want to stock up, go to Irale's (see map) (although this will cost some of your gold, of which you don't have much at this point). (The first stash mentioned in "Secrets" below is opposite his door.) Now go see Governor Mourel (F) and talk to him; there are two more stashes (see "Secrets") you can collect whilst in there. (On the way, you can talk to Mourel's aide Arion, but this doesn't do anything so there's no point.) Mourel will offer you a choice of two missions, one messy, the other bloody; fortunately, you only need to do one of them. (Note: Finish your conversation with Mourel, and allow Blackbird to say whatever she has to say in response, before moving away from his desk; otherwise when you get to the door, you could have two transmissions from her playing at once, which is both mind-boggling and hard to follow.)

The "messy" side mission

Accept with the first item of your conversation dialog. Head back to and go down the first staircase you ever saw in this game (G); there, you can choose to talk to MacGuffin. The first two conversation options reveal that the power coupling you have been sent to destroy is right here in the sewage farm; additionally the second reveals that it's actually the Front's coupling (the Governor lied). (If you take either of the other options, or don't speak with MacGuffin, Blackbird will reveal this information.) However, it is not necessary to speak to MacGuffin to advance the plot. Press the switch on the right of the portal into the sewage farm, temporarily draining the sewage; then run across (you probably haven't got an Environmental Suit yet, so the sewage will hurt you) to the doorway thereby revealed (H). The coupling is in front of you; jump over the cable and head to the corner opposite where you entered, then follow the passage and you will find an already-broken power coupling which the Governor will mistake for "proof" that you broke the other one. Take the elevator and to your right you will see a wall with a brick texture instead of metal; open this to reveal a false wall, and step through it; you are back in the Interrogation Chamber.

The "bloody" side mission

If you want to go this route instead, take the second dialog option. Go to the Power Station (I) and follow the instructions on that page.

Getting the Prison Pass

Head back to the Governor and give him whichever plot token he asked for. He will give you a prison pass, so you know where to go now (J). As always, the walkthrough continues on that page so that you and I can refer to the map.

Visit Irale's (which is very near the Power Station); he will give you some gold and training. Then go to the Hospital and see the medic there for a stamina implant. On the way there, Blackbird will give you your next mission: infiltrate the Castle via the Sewers. So after you get your stamina, go to the Sewer Overflow Gate (see map; it's past the Town Hall, by the river on the opposite shore from the Governor's Mansion) and enter (K). Press the switch on the back of the column to open the Gate, then press the other switch which is to your left as you enter. Drop down the opening, into the Sewers (have your Environmental Suits ready, this isn't a health farm).

No official secrets in the 1996 edition, but the following, although not tagged as secret, give hidden supply caches: