Doom Wiki
Register
Don't have an account?
Sign In
Advertisement
in: MAP01, MAP31, Levels by name,
and 2 more

MAP01: Entryway (MAP31 in PSX/Saturn) is the first map of Doom II. It was designed by Sandy Petersen and uses the music track "Running from Evil". The par time for this map is 30 seconds (retroactively, because it's the first level).

In the PlayStation and Sega Saturn joint port of Doom and Doom II, Entryway is MAP31, and is the port's first Doom II level.

You start the level at a ledge. In front of you are four Zombiemen looking back from you (be careful on higher difficulties as even a punch will alert more Zombiemen in the hallway). Kill them and proceed to the hallway. Continue down the path until you see a room with health bonuses, then turn left. You'll come to a dark room. On the right side of the room is the exit. Flip the switch inside to complete the level.

The initial view of Entryway. In the distance, two Zombiemen stand with their backs facing the player.

View of bug #1 from Object View in Doom Builder 2

View of bug #1 from Overhead View in Doom Builder 2

This level contains the following numbers of things per skill level: 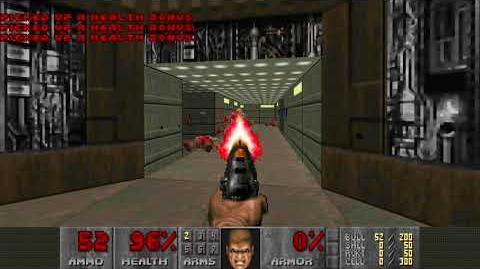